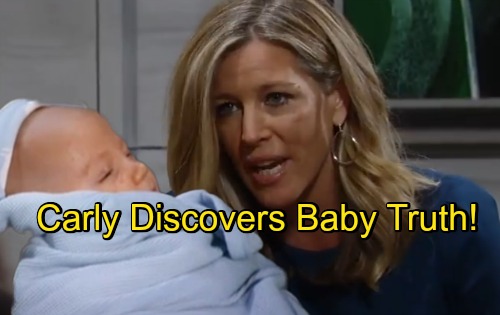 General Hospital spoilers say that Nelle (Chloe Lanier) makes her exit on this week’s new GH episodes, August 6-10. Full details of her departure have not been released yet other than that Nelle will not be killed off. Let’s look at a few things that could happen before she disappears for now.

Carly Deserves To Have Her Say

Carly (Laura Wright) was good to Nelle when she first came to town. Carly gave Nelle a job. Carly made sure Nelle had a place to stay. Frankly, Carly made sure Nelle wanted for nothing. Nelle repaid Carly by drugging her husband. Making it look like she slept with Sonny (Maurice Benard) and now gaslighting Carly.

Nelle went as far as to frame Carly for attempted murder. General Hospital spoilers tease that Nelle’s reign has come to an end. It is time for Carly to have her say.

Carly may have to turn herself in until she’s cleared. Margaux (Elizabeth Hendrickson) may see what really happened and drop the charges. Either way, Carly will insist on having a word with Nelle.

Carly is likely to say much more than Josslyn did. Carly is certain to gloat about Nelle being caught. Nelle’s almost marriage is likely to be brought up as well. In the end, it’s difficult to say which one will get the final word.

Nelle Could Throw A Clue Out About The Baby

However, General Hospital viewers know that isn’t what she’s referring to at all. However, providing the baby is really Michael’s child, Nelle doesn’t know about the Quartermaine birthmark. It is highly likely that Carly or Sam (Kelly Monaco) will notice if the baby has that birthmark.

Both of them have Quartermaine children and know about it. After all, Michael is A.J. Quartermaine’s (Sean Kanan) son and A.J. certainly had that birthmark. Could Carly or Sam actually discover that ‘Wiley’ is indeed Jonah, Michael’s child? Could Nelle say too much and make Carly suspicious?

GH fans know that it’s not like a similar baby switch didn’t take place in 2012. Sam thought Danny (T.K. Weaver) was dead for months before Jason (Steve Burton) found him. The writers could be going with a similar story here.

Could Baby Corinthos Get Sick And Need Blood?

General Hospital spoilers indicate that it is very possible that the story will be written this way. It is also possible, but unlikely, that Brad’s conscience gets to him and the truth comes out?

However this reveal happens, and General Hospital spoilers tell us that eventually it will happen. Michael will either have his child or find out that yet another child is not his.

Nelle’s reign of terror needs to end for good but long-time General Hospital fans know that bad pennies always resurface. This GH penny is likely to keep coming back for more. We’ll give you updates as new GH details emerge. Stay tuned to the ABC soap and don’t forget to check CDL often for the latest General Hospital spoilers, updates and news.