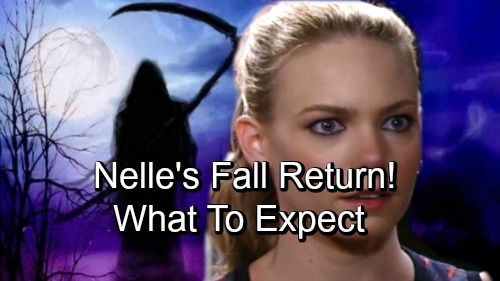 General Hospital (GH) spoilers tease that some fall shockers are brewing. GH fans know that one secret’s sure to bring major drama. It’s too early to say how much will be revealed, but the walls are clearly closing in on Brad (Parry Shen). You can bet that Michael (Chad Duell) will at least have some suspicions about “Wiley” soon. That inherited heart condition is just one of many clues in this story.

Of course, Nelle’s (Chloe Lanier) letter to Michael was another one. She taunted Michael a bit by forgiving him for turning against her and causing the crash. However, the real hint came through a piece of advice. Nelle suggested that Michael should find comfort with Lucas and Brad’s little boy. As the puzzle starts adding up, Michael should find himself pondering that note more and more.

General Hospital spoilers say Nelle will come back in the picture sooner or later. When Chloe Lanier left the role, she assured fans it wasn’t the end of the road. How could it be thanks to the exit they gave her? There’s pretty much no way to expose the baby swap without Nelle. Michael and Carly (Laura Wright) will inevitably want to confront the lying schemer at some point.

Lanier has said that she wouldn’t mind a recurring part on GH. She’d certainly love to pop in from time to time. It’s worth mentioning that Lanier doesn’t seem to have any projects lined up right now. After General Hospital, her IMDB page only lists a film that’s already in post-production. It sounds like Lanier’s schedule could be wide open, so GH might as well work her into the story again.

Is General Hospital prepping for Nelle’s fall return? There are a couple routes they could take here. GH could have Michael or Carly confront Nelle in prison. As suspicions grow, one of them could demand answers about Jonah. Nelle may be suspected of cooking up a plot, especially if she sends another letter with one more bomb. Out of desperation, perhaps she could reveal that Jonah’s alive.

Nelle might stay tight-lipped about where Jonah is and who he’s with. She may want Michael to get her off the hook somehow first. Michael could decide to just let Nelle rot and figure this out himself. It wouldn’t be too hard since anvils are dropping all over the place.

Again, “Wiley’s” inherited heart condition could be a big giveaway. That’s especially true since Michael feels such a special bond with him. Nelle and Brad’s previous friendship would be one more way for things to add up.

Of course, Nelle could be confronted after the mystery’s solved instead. That’d bring some great drama as well. Regardless, General Hospital spoilers say Nelle will be needed for the fallout of all this. Don’t miss the Nelle mayhem ahead! We’ll give you updates as other news comes in. Stick with ABC’s GH and don’t forget to check CDL often for the latest General Hospital spoilers, updates and news.