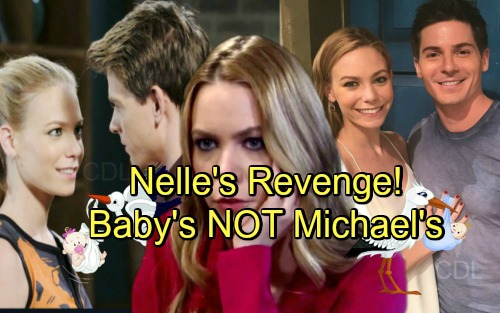 General Hospital (GH) spoilers tease that Michael (Chad Duell) will continue his fierce takedown mission. He wants to undo the damage he’s caused for Carly (Laura Wright) and the rest of his family, but keeping his child safe is the priority. Michael knows he has to step up and be there for this son or daughter. He can’t let Nelle (Chloe Lanier) gain control of this kid and inflict her usual terror.

Even before Michael started plotting against Nelle, he constantly talked about being there for the baby. Michael may not like the circumstances he’s dealing with, but he definitely cares about the child she’s bringing into the world. That’s why Michael’s so determined to act quickly. He wants to wrap this up so his baby can come home to a safe environment.

Once Nelle’s out of the picture, Michael feels confident that everything will settle down. He’s hoping he can raise his child in peace, but not so fast! There’s no way GH will make things that simple for Michael. Some big twists are coming up, so Michael had better be ready for anything.

When it comes to Nelle, she’s always got a few tricks up her sleeve. She could have a final one waiting at the end of her run, but let’s talk about the drama beforehand. General Hospital spoilers hint that Nelle may push Chase (Josh Swickard) to commit murder. It appears she’ll want him to kill Michael so they can take the money and build a new life elsewhere.

Of course, Nelle will want Chase to be careful about it. This has look like an accident or Nelle will never see a dime. Alas, it turns out Nelle would never see a dime anyway! Based on that suspicious pen situation, it’s pretty much guaranteed that the marriage license was signed with disappearing ink.

Plus, Michael won’t actually be dead after the plot’s carried out. Nelle’s going to feel duped by both Michael and Chase, who claimed he actually loved her. Since Nelle seems to have genuine feelings for the hot detective, that’ll be a particularly infuriating blow. Nelle’s going to be heartbroken, penniless, enraged and most likely locked up. Is that any way to end this devious villain’s run?!

General Hospital just might let Nelle get the last laugh. Let’s say the shock of Michael and Chase’s plan sends her into labor. Nelle may even be handcuffed to a hospital bed during the delivery! When Michael finally gets to look in his beautiful baby’s eyes, Nelle may yank it all away. Will she reveal that the kid isn’t Michael’s after all?

From the get-go, this whole pregnancy seemed like a scheme to trap Michael. The paternity test results could’ve easily been phony. General Hospital spoilers have been hinting that Michael may not become a father just yet. Perhaps Nelle’s trickery will be the reason why! We’ll give you updates as other GH news comes in. Stick with the ABC soap and don’t forget to check CDL often for the latest General Hospital spoilers, updates and news.