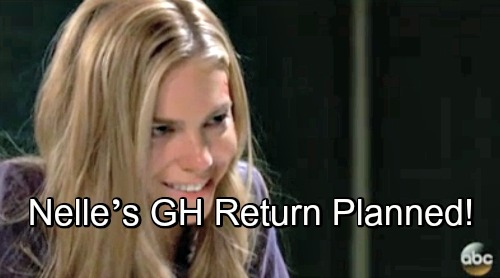 General Hospital (GH) spoilers tease that Chloe Lanier just wrapped up her impressive run as Nelle Benson. It was a wild ride from the get-go, but GH really revved up the excitement toward the end. However, the show left the door open for Nelle’s return. Based on Lanier’s recent Twitter chat, it looks like she intends to take advantage of that.

In other words, it seems Nelle’s comeback was planned before she ever hit the exit. When a fan asked if Lanier would be willing to reprise her role, Lanier insisted she was totally on board. “I love this character,” Lanier said. “She isn’t done yet.”

Toward the end of the chat, Lanier reiterated her point. She expressed her gratitude to everyone for watching and hinted that Nelle will come roaring back. “Thank you for helping make the past two years some of the best of my life,” Lanier gushed to her fans. “Also…Nelle isn’t dead. She isn’t done.”

There you have it! If Lanier’s so certain that Nelle’s returning, General Hospital may have already set something up. It makes sense that they’d want to use Nelle for the baby swap reveal – even if Michael (Chad Duell) just visits Nelle in prison and lashes out through the glass partition. That revelation is something Nelle needs to be around for.

Of course, Nelle could eventually break out or get some hotshot lawyer to help her beat the charges. In soap land, anything’s possible. Nelle has more stories to tell, so GH viewers will anxiously await her vengeful return. She’s bound to go after Carly (Laura Wright) and the rest of the Corinthos clan again down the road.

For now, Nelle’s leaving behind quite a jam for Brad (Parry Shen) and plenty of heartache for Michael. General Hospital spoilers say this storyline will bring several twists and turns, so that’s sure to be fun for GH watchers. When asked about the chances of Nelle getting revenge through the baby, Lanier suggested that “she already is.” She’s definitely right about that!

Lanier intends to branch out with new roles, but she hopes they’ll be “flawed, complex women” like Nelle. If you’re wondering about Nelle potentially showing up on another soap or as another GH character, think again. Lanier insisted she would only reprise her role as General Hospital’s Nelle. She nixed the idea of joining another daytime drama or popping up as someone new in Port Charles.

It sounds like everyone will just have to be patient and wait for Nelle’s eventual comeback. We’ll give you updates as other GH news comes in. Stay tuned to the ABC soap and don’t forget to check CDL often for the General Hospital spoilers, updates and news.

Thank you to all of my passionate and lovely @GeneralHospital fans !!! I love you from the bottom of my heart. Thank you for helping make the past two years some of the best of my life. Also…Nelle isn’t dead. She isn’t done. ☠️😺

It wouldn't be a proper #GH goodbye without cake! 🍰@chloelanier … we miss you already. 😢#GH55 pic.twitter.com/mGq99tdHZ6