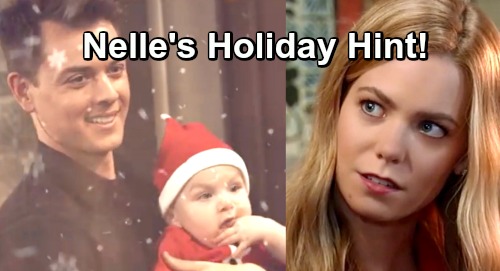 General Hospital (GH) spoilers tease that Michael (Chad Duell) may prepare for a blue Christmas. He’s been attending bereavement group meetings and even started opening up thanks to Willow (Katelyn MacMullen), but the holidays could still bring sorrow. This time of year can certainly be difficult for those dealing with loss.

Michael will undoubtedly wish Jonah was alive to celebrate his first Christmas. He may imagine all the Christmases that would’ve followed as well. Michael would’ve loved the chance to be a doting daddy. He’ll hate that he’s never going to see Jonah’s eyes light up over Santa or the presents under the tree.

Of course, GH fans know Jonah is perfectly fine. He’s hiding in plain sight due to Brad (Parry Shen) and Nelle’s (Chloe Lanier) baby swap. This hot plot has cooled off recently, but it’s probably about to heat up again soon. Every interaction between Michael and “Wiley” brings a shot at serious suspicions.

Brad knows it’s not a good idea to let Michael spend time with his son, but it’s awfully tough to keep them apart. The guilt alone makes it incredibly difficult. That’s why Brad won’t put up a fight when Michael asks to hold “Wiley” this Christmas.

Michael will gush over the kid in a Santa hat and grow even closer to him. It’d almost be creepy for Michael to be this obsessed if we didn’t know the truth! Fortunately, we’re all in the loop on GH’s perfectly reasonable explanation. Michael feels a strong bond with “Wiley” because he’s his own flesh and blood.

That bond’s only going to get stronger as time goes on, but a connection isn’t enough to tip Michael off. He’ll need more than a bizarre feeling and the heart condition hints. Could a Christmas clue be looming? Will Brad let something slip that leaves Michael curious?

General Hospital spoilers say Brad and Julian (William deVry) have another crucial conversation coming up. If Michael eavesdrops and overhears some tidbit, it could spell trouble. Michael would at least file that away to back up a future revelation.

Then again, it could be Nelle who comes through with a Christmas card or letter. Will she really let the holidays go by without any form of contact? That wouldn’t be very Nelle-like! She shouldn’t pass up the opportunity to stir the pot this season. Maybe Nelle could deliver the next hint via a new message.

Regardless, Michael has to find out the truth eventually. General Hospital will inch Michael toward it in the coming months, so stay tuned for all the drama. We’ll give you updates as other GH news emerges. Stick with the ABC soap and don’t forget CDL often for the latest General Hospital spoilers, updates and news.