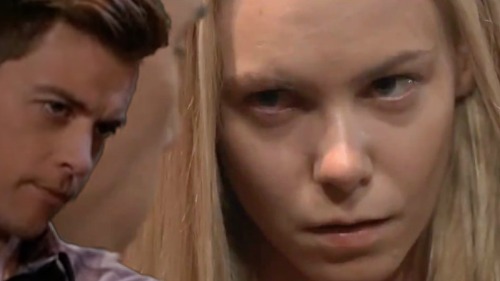 General Hospital (GH) spoilers tease that Nelle (Chloe Lanier) won’t just fade into oblivion. She was given the maximum sentence, so Pentonville should be her home for quite some time. However, that doesn’t mean Nelle won’t be part of the story. Lanier has been open about her desire to make GH comebacks. She didn’t want to be locked in with a contract, but a recurring role suits her just fine.

GH had Nelle pop up for two episodes not too long ago. You can bet that more will follow down the road. There’s just no way to expose this baby swap without her. Nelle was the one who set all this in motion, so she needs to be part of the brutal fallout.

Of course, Nelle could reprise her role before the truth comes to light. She may even be the reason that the baby switch is discovered. Before Nelle was carted off, she gave Brad (Parry Shen) a chilling warning. Her two-part statement seemed like a fierce threat.

Nelle indicated that although her sentence was extreme, she might get out for good behavior someday. That’s wishful thinking with all the charges she faced, but it brings up some intriguing possibilities. Whether she plots a getaway or finds a lawyer who can exploit a legal loophole, Nelle could score her freedom. This comment seems like a sign that Nelle will come roaring back.

Nelle also reminded Brad of the bond between a mother and her child. With a mischievous look in her eye, she pointed out that there was nothing stronger. General Hospital spoilers say Brad’s panic will intensify down the road. Perhaps Nelle will be one of the reasons why. She doesn’t have much to do behind bars except scheme and write letters. Nelle already sent one to Michael, but maybe Brad’s next.

Will Brad get a cryptic note about what’s ahead? Nelle might demand a visit or two with “Wiley” aka Jonah. She got choked up over seeing him, so she might push to see him again. If Brad ignores Nelle’s letter or reaches out to deny her request, he could risk provoking her. Nelle could threaten to blab if Brad doesn’t cooperate.

Since Nelle is nuts, she might even call on Brad to get her out of there. He’s obviously no stranger to sneaky plans, so Nelle may think he can make it happen. Then again, Nelle could torture Brad with letters just for kicks. She has to find some way to entertain herself in the slammer.

If Michael (Chad Duell) found out about all the contact between them, it might raise red flags. That’s especially true if he got his hands on a letter with too much info! Bottom line, Nelle isn’t done causing trouble. Her threat will leave Brad reeling, so don’t miss what’s in store.

Are you looking forward to the rest of the baby drama? Do you hope Nelle’s part of Brad’s shocking exposure? We’ll give you updates as other General Hospital news comes in. Stay tuned to ABC’s GH and don’t forget to check CDL often for the latest General Hospital spoilers, updates and news.