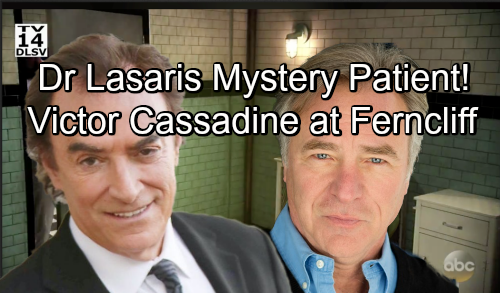 General Hospital spoilers tease that new General Hospital character Dr. Lasaris (Casey Biggs) may hide a deadly secret…his resume could include having worked for the Crighton-Clark clinic where Victor Cassadine (Thaao Penghlis) was presumed to have died in an explosion.

General Hospital fans will recall that this was the same clinic where Drew Cain (Billy Miller), who was then thought to have been Jason Morgan (Steve Burton) was held in a cryogenic chamber. Dr. Robin Scorpio-Drake (Kimberly McCullough) was forced by Victor to develop a resurrection protocol, intended for Helena (Constance Towers) and Stavros Cassadine (Robert Kelker-Kelly) but used on Jason first by Victor, most likely as a human guinea pig.

Considering the reappearance of Helena soon afterwards, there must have been enough left to resurrect her, as well. But what happened to the formula? Could Lasaris have stolen the formula and used it on Victor, and then imprisoned him in Ferncliff because Lasaris thought the Cassadines developed it, and wanted the credit?

One can only imagine the money that could be made and the fame that could be attained by inventing a resurrection formula. But perhaps Dr. Lasaris didn’t find the written formula, only what was left of what was used on Helena and Drew, and tried to reverse-engineer it.

General Hospital fans will have noticed that the mystery patient can only scream and communicate in Morse Code – maybe there’s a reason for that. If the formula wasn’t reverse-engineered just right, he could have successfully resurrected Victor, but he could have been left with deficits in the part of his brain responsible for speech.