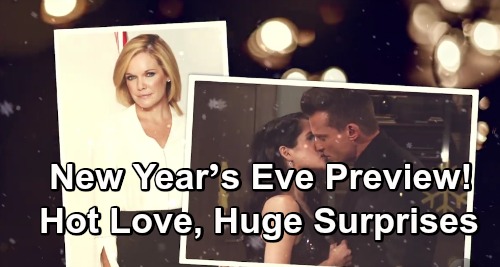 General Hospital (GH) spoilers tease that New Year’s Eve will bring growing feelings, big bombshells and major changes. The GH episode airing December 31 will be a repeat, so GH will celebrate a little early. December 28 will mark the last new episode of the year. It’ll be crammed full of action and romance, so fans won’t want to miss all the looming shockers.

We’ve got a New Year’s Eve preview for you, so let’s take a look at what’s ahead. For starters, General Hospital spoilers say a big bash will get underway. It just wouldn’t be New Year’s Eve without a party, right? This shindig will give several couples and potential couples a chance to grow closer.

Jason Morgan (Steve Burton) and Sam McCall (Kelly Monaco) will definitely be one of those potential couples. They’re stuck in this weird limbo of not quite together, but not quite apart either. The “JaSam” connection is undeniable, but can Sam ever let her walls down completely? She seems to be getting there, but it’s going to take some time.

Fortunately, Sam and Jason should at least get a sweet New Year’s Eve moment. They shared a kiss last year, so it’s only fair that they get one this year, too. Perhaps this could mark a turning point for the duo. If it leads to some steaminess back at the penthouse, that’d be even better! There are no guarantees, but “JaSam” fans will hope for the best.

Alexis Davis (Nancy Lee Grahn) will also attend this party, but will she be flying solo? Time will tell, but at least Alexis will be mixing and mingling. That should keep loneliness from hitting her too hard. As for Harrison Chase (Josh Swickard), he’ll enjoy a wonderful date with Willow Tait (Katelyn MacMullen). They’ll cap the night off with a midnight lip lock, so Chase must be doing something right.

However, Michael Corinthos (Chad Duell) won’t be too far away. He may witness this kiss and wish he was on the receiving end of Willow’s lips. They’ve been bonding over their losses, so it won’t be long until this turns into a full-fledged love triangle.

Of course, this New Year’s Eve party won’t be the only thing going on. On December 28, General Hospital spoilers say Kristina Corinthos-Davis (Lexi Ainsworth) will make a significant choice. She’ll make some startling shifts in her life the following week, so this undoubtedly involves her cult initiation. The mystery surrounding DOD will continue to unravel in the coming weeks.

Finally, Olivia Quartermaine (Lisa LoCicero) will make a stunning discovery. Ryan Chamberlain (Jon Lindstrom) didn’t kill anyone for Christmas, but what about New Year’s Eve? Will everyone on canvas survive this holiday? It’s possible Olivia will find a corpse, but only Ryan can know for sure.

Regardless, General Hospital viewers will want to check out this fun episode and all its twists. We’ll give you updates as other GH news emerges. Stay tuned to the ABC soap and don’t forget to check CDL often for the latest General Hospital spoilers, updates and news.