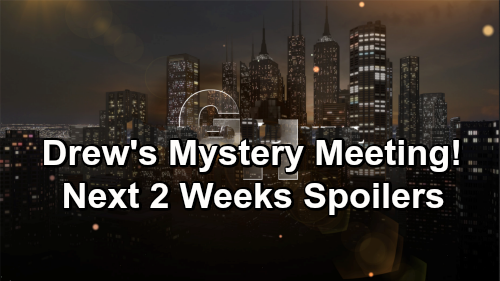 General Hospital (GH) spoilers for the next two weeks, December 17-28, tease that the drama will heat up in Port Charles. During the week of December 17-21, Carly (Laura Wright) will spar with Sonny (Maurice Benard) again. This could be about his growing bond with Margaux (Elizabeth Hendrickson) or perhaps a Mike (Max Gail) issue. Regardless, Sonny and Carly won’t agree on how to handle it.

Naturally, Carly will seek Jason’s (Steve Burton) support. She’ll rant to her bestie and most likely push him to make Sonny see the light. However, Jason will have other tasks to focus on this week. He’ll enjoy family time with Sam (Kelly Monaco) and Danny (T.K. Weaver) before helping Sam out with her mysterious case. Some alarming emails will put them on an intriguing path.

Over with Liz (Rebecca Herbst), she’ll be livid for a couple reasons. It looks like Cameron (William Lipton) will get caught with weed, so that’ll leave her upset with her son. Of course, Liz will also be outraged over Charlotte’s (Scarlett Fernandez) bullying and the people that let it go on.

Valentin (James Patrick Stuart) and Nina (Michelle Stafford) may get most of the blame here since Lulu (Emme Rylan) has made a genuine effort to stop Charlotte’s behavior. She’s hopefully turned over a new leaf, but Liz will still have a bone to pick. It’s good that Liz will have Franco (Roger Howarth) to lean on as all this blows up.

During the week of December 24-28, Ava (Maura West) will have another outburst. General Hospital spoilers say grief will continue to take a toll, so you can bet Ryan (Jon Lindstrom) will exploit that. He’ll also do torture Kevin (Jon Lindstrom) a bit through a visit and some other sneaky tactics.

Meanwhile, Laura (Genie Francis) will hope Felicia (Kristina Wagner) can assist her. She’ll probably need help regarding “Kevin,” who just isn’t himself for reasons obvious to GH fans. It should be nice to see the history angle played up a bit more. Felicia deserves to be a key player in Ryan’s latest storyline!

Other General Hospital spoilers say Jason will deliver a serious warning. He won’t think Sonny should be cozying up to DA Dawson. Jason will argue that it’s a bad idea for many reasons. He won’t completely trust Margaux and this could certainly wreak havoc in Sonny’s marriage.

Carly will grow increasingly upset about Sonny and Margaux’s connection, so Jason may believe it’s time for Sonny to back off. Elsewhere, Kristina (Lexi Ainsworth) will make a significant choice. Will this be about Daisy (Kelsey Wang) and DOD? Kristina may make a bigger commitment to this cult and seal her fate!

Next, Julian (William deVry) will have a chat with Josslyn (Eden McCoy). She may want to talk about Kim (Tamara Braun) and how Oscar’s (Garren Stitt) battle is affecting her. Finally, Drew (Billy Miller) will be caught off guard. Someone mysterious will show up from Drew’s past, so this could stir up some interesting tidbits.