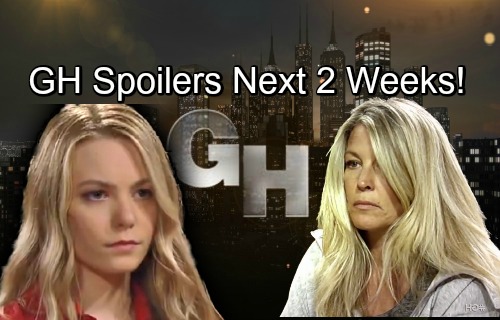 General Hospital (GH) spoilers for the next two weeks tease that some surprises are on the way. During the week of July 23-27, Drew (Billy Miller) will have a couple encounters with Margaux (Elizabeth Hendrickson). It looks like she’ll seek him out for a business deal the first time around – at least that’ll be her excuse! Perhaps DA Dawson is actually just interested in getting to know Drew a bit better.

It appears the second encounter will be a happy accident. Drew and Margaux may feel like the universe wants them to hang out. A friendship is forming, but that’s usually followed by romance on a soap. General Hospital spoilers say these two will definitely be spending lots of time together from now on.

In the meantime, Nina (Michelle Stafford) will ponder a puzzling stroke of luck. She’ll be facing legal consequences for her role in Liesl’s (Kathleen Gati) plot, but the charges could suddenly become less hefty. This seems to have Valentin (James Patrick Stuart) written all over it, but will it be enough to win back his love? Despite this and Valentin’s heroic rescue, Nina may struggle to offer him another chance.

The week of July 30-August 3 will bring fear, guilt and helplessness for Sonny (Maurice Benard). This may be about Carly’s dilemma, but Michael (Chad Duell) will also be in over his head. He’ll lose his grip on the plot, so expect some jaw-dropping moments. Nelle’s (Chloe Lanier) capable of anything, which means Chase’s (Josh Swickard) plan could take a perilous turn.

Chase will indeed hold himself responsible when things go awry. He’ll feel terrible, so Michael may land at GH with severe injuries. Griffin (Matt Cohen) will express concern around the same time. That could be a hint that he’ll work on Michael during the potentially bloody aftermath.

Over with Josslyn (Eden McCoy), she’ll battle both terror and fury. As you might expect, General Hospital spoilers hint that Josslyn and Nelle’s friendship will be shattered. Will Josslyn rip into her former gal pal? She will if Nelle sticks around long enough, but there’s no guarantee of that.

Nelle will inevitably try to make a break for it if she can, but Chase will do his best to keep her around. He’s determined to lock Nelle up and throw away the key! We’ll keep you posted as other GH news comes in. Stay tuned to the ABC soap and don’t forget to check CDL often for the latest General Hospital spoilers, updates and news.