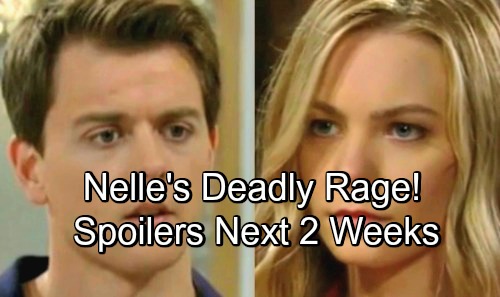 General Hospital (GH) spoilers for the next two weeks tease that big trouble’s brewing in Port Charles. During the week of July 16-20, Sonny (Maurice Benard) will be unbelievably frustrated. Carly’s (Laura Wright) Ferncliff escape will leave her stuck in a real mess. Sonny won’t be able to prevent the consequences, so Carly will just have to face the music. Some tough times are headed her way.

Meanwhile, Nelle (Chloe Lanier) will marry Michael (Chad Duell) and prepare for a bright future. She’ll actually start to think this could work out. Moments later, Nelle’s dream will shatter. After Josslyn (Eden McCoy) blabs about the kiss, Michael will insist that he’s got a grip on the situation. He won’t be concerned about Chase (Josh Swickard) making his move.

Once Nelle overhears their chat, she’ll determine that Michael has no love in his heart. It looks like her murder plan will eventually kick off! Later, General Hospital spoilers say Nelle will call on Chase for assistance. Since he’s plotting with Michael, he’ll happily reel Nelle in for her takedown.

Over with Franco (Roger Howarth), he’ll provoke Liesl Obrecht’s (Kathleen Gati) wrath. Franco just won’t feel like Dr. O has given him the whole story. He may get another clue about Peter (Wes Ramsey) and demand some answers.

The week of July 23-27 will deliver even more drama. General Hospital spoilers state that Drew (Billy Flynn) will get a present, but what will it be? It’d be nice if it was the flash drive, but that may be wishful thinking. GH doesn’t seem in a hurry to tell that story!

Afterward, Drew will bump into Margaux (Elizabeth Hendrickson). Is General Hospital setting these two up as a new pairing? That seems like a good possibility. Viewers can expect several encounters for Margaux and Drew, so let’s hope they start getting to know each other.

Back with Carly, she’ll deal with some confusion. Carly won’t be able to make sense of anything, so there are a couple of options here. She might be sedated again thanks to evil Mary Pat (Patricia Bethune). That would certainly affect Carly’s ability to mull over her situation.

However, it’s also possible Carly will get a mystery patient hint and struggle to understand it. As for Sonny, he’ll get into an argument with Kevin (Jon Lindstrom) (it it really is Kevin!). He may disagree about Carly’s treatment, so expect some explosive conflict.

Other General Hospital spoilers say Kiki (Haley Erin) will suffer a crushing blow. Will things get underway in court? Will the picture be presented as evidence? That could spell doom and gloom for the secretive med student. Kiki’s one-night stand with Griffin (Matt Cohen) will inevitably be exposed soon enough.

It sounds like the next two weeks will pack in plenty of shockers. We’ll give you updates as other GH news comes in. Stay tuned to the ABC soap and don’t forget to check CDL often for the latest General Hospital spoilers, updates and news.