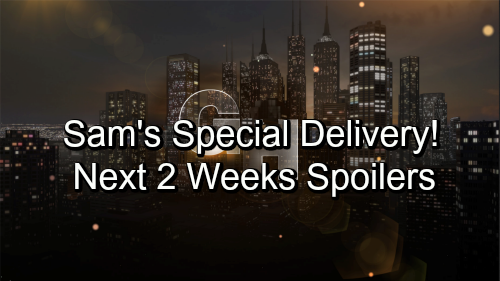 General Hospital (GH) spoilers for the next two weeks tease that some surprises are in store. The week of December 3-7 will bring a murder case clue for Chase (Josh Swickard). Let’s hope it gets him a step closer to clearing Griffin’s (Matt Cohen) name. In the meantime, Griffin will face Ava’s (Maura West) fury at the police station. She’ll nearly shoot him as she unloads all her Kiki (Hayley Erin) grief.

Over with Anna (Finola Hughes), she’ll face quite a bombshell. Anna’s determined to trap Liesl Obrecht (Kathleen Gati), but Dr. O could be a bit more slippery than expected. Elsewhere, Sonny (Maurice Benard) will have an awkward encounter with Margaux (Elizabeth Hendrickson). He’ll hope to make sure she’ll back off, but he won’t want to push too hard and derail his own plan.

Other General Hospital spoilers say Julian (William deVry) will have a meltdown. He’ll go off on someone before trying to repair the damage later. Will Julian take his Kiki anger out on Kim (Tamara Braun)? The Jeromes are hurting right now, so Kim should understand if Julian explains how he’s feeling.

Over with Jordan (Briana Nicole Henry), she’ll feel like there’s something she’s missing. Based on all the evidence, Jordan will start to think someone’s messing with them. She’ll believe the killer’s creating chaos and hoping it’ll point away from the truth. Jordan will become consumed with solving these murders and bringing this monster to justice.

Across town, Sam (Kelly Monaco) will have a special delivery. She’ll give Alexis (Nancy Lee Grahn) something significant, so GH fans will be anxious to see what it is. The week of December 10-14 will deliver another round of heartbreak for Ava. She’ll sink deeper and deeper into depression, so Ryan (Jon Lindstrom) will exploit her new weakness. He’ll do whatever he can to push Ava over the edge.

Other General Hospital spoilers say Carly (Laura Wright) will long for Morgan (Bryan Craig). She’ll stop by his grave to chat with her son and reflect on his life. In the meantime, Drew (Billy Miller) will struggle to believe something. Could this involve Margaux having a change of heart about the flash drive? Will Drew believe it’s too good to be true? That’s one possibility to consider.

Then again, Drew might be in denial about Oscar (Garren Stitt) and a negative response to the clinical trial. There are plenty of risks involved here. Nina (Michelle Stafford) won’t have the easiest week either. She’ll battle some disappointment before getting some advice about her love life. Nina will be urged to give Valentin another shot, but is that something she’ll be willing to do?

Over with Cameron (William Lipton), he’ll second-guess his decision. This might involve how he told Josslyn (Eden McCoy) the truth about Oscar’s condition. Now Cam’s lost his chance with her and Oscar could die if this treatment goes wrong. Those are some things that Cameron could wrestle with.

Finally, Willow (Katelyn MacMullen) will be taken aback. Will this be tied to Chase or perhaps Michael (Chad Duell)? One of them just might give Willow a shock. We’ll give you updates as other GH news comes in. Stay tuned to the ABC soap and don’t forget to check CDL often for the latest General Hospital spoilers, updates and news.