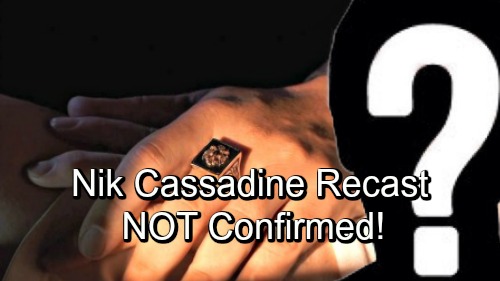 General Hospital (GH) spoilers reveal that some soap gossip needs to be debunked. Some sites out there point to a “leak” as confirmation of Nikolas Cassadine’s (last played by Nick Stabile) comeback. They suggest that a CBS actor has been tapped to play a recast, but there’s no real evidence of that.

Because this so-called leaker previously mentioned Kevin (Jon Lindstrom) and Ryan’s (Jon Lindstrom) swap along with Laura’s (Genie Francis) return, some people are accepting it as fact. However, it was pretty easy to guess the Ryan and Kevin switch if you were paying attention. Why else would Kevin have been so close to Carly (Laura Wright) and the mysterious patient at Ferncliff?

Plus, bringing Laura back was a no-brainer. There was no way GH could do a huge Kevin story without his wife around. It’s wise to question “leaks” when they fall under the category of assumption or there’s just no proof. We’re dealing with the latter in the case of Nik Cassadine.

Of course, it’s possible General Hospital has plans for a Nikolas recast. Someone with a Cassadine ring kidnapped Cassandra (Jessica Tuck), so something seems to be brewing. However, that could just as easily point to Stefan (Stephen Nichols) or Victor’s (Thaao Penghlis) return. The point is it’s still a mystery. There’s no confirmation out there on a CBS actor taking over the part of Nikolas.

In light of this bogus info, some strange recast options started swirling around. Sean Carrigan (ex-Ben “Stitch” Rayburn on The Young and the Restless), Robert Adamson (ex-Noah Newman, also on Y&R) and Pierson Fode (Thomas Forrester on The Bold and the Beautiful) were all suggestions. All of these would be major miscasts, but there’s no need to worry since they were created out of thin air.

This fake leak also suggests Nikolas could end up hiding in plain sight for several weeks after plastic surgery. Again, there’s no confirmation on anything like that. Valentin (James Patrick Stuart) will seemingly be tied up with Nina’s (Michelle Stafford) daughter search for a while. Laura will also have Kevin and Ryan chaos to deal with. There doesn’t seem to be room for Nik-related mayhem just yet.