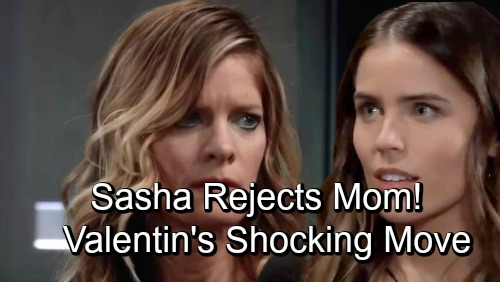 General Hospital (GH) spoilers tease that Nina (Michelle Stafford) will grow increasingly nervous as she prepares to meet her daughter. Of course, part of her will look forward to introducing herself and hopefully getting to know Sasha (Sofia Mattsson). Nina craves a mother-child connection, so she’d certainly love to reach that point with Sasha one day.

However, Nina just won’t be able to shake her fears and doubts. She’ll worry that Sasha won’t have any interest in bonding. After all, Sasha wasn’t exactly happy when Curtis (Donnell Turner) came to her with this possibility. She refused to believe she was adopted, which is why she agreed to the DNA tests. Sasha wanted to prove Nina wasn’t her mother, so she won’t be happy that she’s wrong.

Despite Sasha’s displeasure, she’ll move forward with plans to see Nina. Unfortunately, Sasha will deliver a shocker when she arrives. She’ll most likely contend that this will be their first and only meeting. Sasha will make it clear that she has no interest in forming any kind of relationship. She’ll completely reject Nina and leave her crushed.

Nina may suggest that she doesn’t want to overshadow Sasha’s adoptive mom. She just wants a chance to chat a bit and see what they have in common. Curtis knows Sasha likes horses, so he mentioned that to Nina. Perhaps Nina will bring that up and attempt to put some warmth in the conversation. She’ll be desperate for a way to make Sasha understand how much she wants this.

Sadly, Sasha will stand her ground for now. Nina will undoubtedly insist that she respects Sasha’s decision. She may thank her daughter for meeting her and wish her well. Once Sasha’s gone, Nina will totally crumble. She’ll feel like her dream’s been dashed all over again, so expect some heartbreaking scenes.

General Hospital spoilers say Valentin (James Patrick Stuart) will come along to see how their first interaction went. He’ll be gutted when Nina’s practically drowning in her own tears. Naturally, Valentin will comfort Nina in her time of need. Maybe he’ll even take drastic action to get Sasha on Nina’s side. GH fans know Valentin would do anything for his true love!

On the bright side, there’s always a possibility the evidence is wrong and Sasha isn’t the real deal. If that’s the case, Nina’s actual daughter could still be out there. She may be just as desperate to connect! We’ll give you updates as other General Hospital news comes in. Stay tuned to ABC’s GH and don’t forget to check CDL often for the latest General Hospital spoilers, updates and news.