General Hospital Spoilers: Nina Devastated When Search Hits a Dead End – Valentin Refuses to Give Up on Long-Lost Daughter 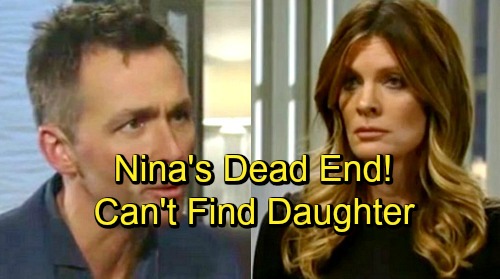 General Hospital (GH) spoilers tease that Nina Reeves’ (Michelle Stafford) search for her grown child will hit a dead end. She’ll get frustrated, but there’s still hope for a sweet reunion. Curtis Ashford (Donnell Turner) will deliver some important updates to Valentin Cassadine (James Patrick Stuart) soon. Nina won’t realize it, but the hunt will still be on and going strong.

Nina reached out to a jewelry appraiser to learn more about the heart pendant, which Madeline Reeves (Donna Mills) cut in half. However, it’s not clear what info Nina expects to gain here. It’s possible Nina hopes to trace the piece through auction records, but that may not get her very far.

Even if this appraiser can identify the necklace’s origins, how will that get Nina any closer to finding the other half of the pendant? That half is presumably with her daughter, but tracking them both down should be tough. Since a necklace is all Nina has to go on, it’s no wonder a dead end’s looming.

Other General Hospital spoilers say Maxie Jones (Kirsten Storms) will continue to be confused. She doesn’t understand why Nina’s so insistent that the necklace is some kind of sign. Half a heart pendant doesn’t prove anything. Long-lost children stories are far-fetched anyway, but many GH fans took issue with this unnecessarily preposterous plot point.

Nevertheless, at least we know Nina’s right about the meaning. Her kid’s indeed out there somewhere. General Hospital spoilers state that Nina will lean on Maxie for support and press for answers. She’ll try to figure out why she’s facing crushing roadblocks, so Maxie may struggle to hold back an “I told you so.”

It’s obvious that Nina’s fired up about the search, so she won’t give up easily. Despite the initial setbacks, Nina will undoubtedly look for other clues. She’ll be desperate for info that could point her in the right direction. Still, the road ahead will bring heartache and even some taunting from Ava Jerome (Maura West). General Hospital spoilers say that’ll result in a major showdown between Ava and Nina.

Could this be a hint about what’s to come? Will Nina confront Ava about the timing of her own pregnancy and Ava’s pregnancy with Kiki Jerome (Hayley Erin)? Plenty of GH fans believe Kiki could be Nina’s daughter. That’s a great option, but we can’t rule out even more surprising ones. The possibilities are endless, so General Hospital can take this story anywhere they want to go.

Perhaps Nina’s child will turn out to be someone viewers never suspected. It’d be fun to get a real GH twist, so let’s hope the solution’s a shocker. We’ll keep you posted as other news comes in. Stick with the ABC soap and don’t forget to check CDL often for the latest General Hospital spoilers, updates and news.