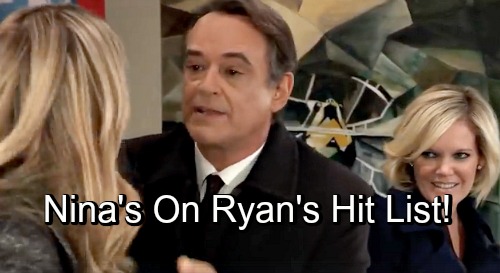 General Hospital (GH) spoilers tease that Ryan (Jon Lindstrom) will continue to dote on the new lady in his life. He’s been showering Ava (Maura West) with compliments and manipulating her mindset. Ryan just can’t get enough of Ava and that spells trouble for anyone who dares to cross her!

GH fans know Ryan’s already involved in the Kiki (Hayley Erin) situation. When he handed over those sleeping pills to Ava, Ryan undoubtedly knew what she’d do with them. He’s the kind of guy who’s always two steps ahead of the game. Ryan most likely wanted to see if Ava had the brains to backup her beauty and dark nature. It’s safe to say she passed that test with flying colors.

Now Ryan’s obsession is growing stronger, which means his relationship with Ava will grow stronger as well. It looks like they’ll become an official item at some point. General Hospital spoilers say Kiki will remain at risk, especially since Ava’s plan backfired. Griffin (Matt Cohen) put the puzzle pieces together and helped Kiki see that the cheating scandal was her mom’s scam.

Ava may sigh about giving up on revenge, but Ryan won’t stand by and let that happen. He won’t tolerate nuisances who pose a threat to Ava either. Of course, we’re talking about Nina (Michelle Stafford) and her vicious grudge over Sasha (Sofia Mattsson). She attacked Ava at the gallery and probably would’ve done some damage if “Kevin” hadn’t intervened.

Ryan looked awfully sinister as he declared that Nina had made a serious mistake. Did she just land herself on Ryan’s hit list? Since there’s a chance Kiki could be Nina’s biological child, it might be interesting if both their lives ended up in jeopardy. Kiki’s fate will probably be grim since Hayley Erin appears to be leaving the role soon. Nina, on the other hand, could narrowly escape Ryan’s deadly plot.

Still, the threat is there and it’s very real. Nina has no idea who she’s dealing with! If she goes after Ava again, Ryan could unleash his wrath and put a lethal scheme in motion. Nina could at least get severely injured thanks to whatever Ryan has in store.

General Hospital viewers will be anxious to see who Ryan targets next! We’ll give you updates as other GH news comes in. Stay tuned to the ABC soap and don’t forget to check CDL often for the latest General Hospital spoilers, updates and news.