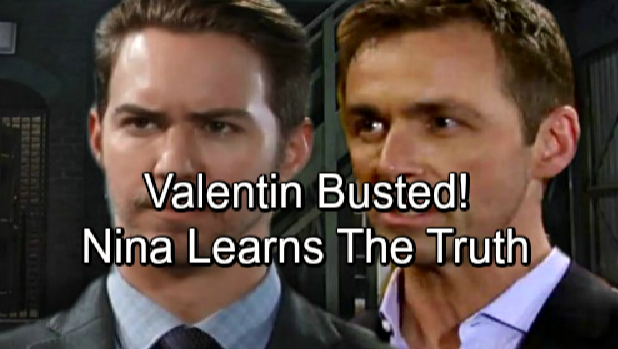 General Hospital (GH) spoilers tease that Valentin (James Patrick Stuart) will pull out all the stops for a romantic evening with Nina (Michelle Stafford). They’ve both been busy lately, so Valentin will want to carve out some time for his lovely wife. Valentin adores Nina and the life they share with Charlotte (Scarlett Fernandez). He’ll just want to make Nina feel special during their sexy night together.

Ordinarily, that’d be great news for a GH couple. Revving up the romance usually solidifies a relationship, right? Unfortunately, the rules don’t apply when one half of a pairing is keeping a HUGE secret. Valentin’s hiding something that could tear his marriage apart and that’s why a romantic spoiler actually spells trouble.

It seems General Hospital is giving us the calm before the storm. Now that Curtis (Donnell Turner) is investigating Peter (Wes Ramsey) for Nina, it won’t be long until he makes some shocking discoveries. Naturally, those discoveries are sure to create major turmoil for Valentin and his relationship.

Nina wants to find out all there is to know about the the mysterious Peter August. She ordered Curtis to learn everything from Peter’s prom date to the type of socks he wears! Nina wants no stone left unturned in this case. She’s hoping she’s wrong, but she certainly doubts it.

Nina’s convinced that Peter is concealing some shockers. Little does she know her own husband is involved! After Valentin sets the mood for love on April 10, everything could go downhill fast. General Hospital spoilers say Nina will seek answers from Curtis on April 11. She’ll hope he’s got some juicy info for her.

Curtis will set up a meeting with Nina a short time later. He’ll want to see her in person, which could also be a bad sign. Curtis may have to share something so horrible that he doesn’t want to deliver it over the phone. Will Curtis find out about Peter and Valentin’s connection? Is this the bomb he’ll drop? That alone would be enough to leave Nina reeling, but GH fans know there’s more to the story.

Curtis will inevitably keep digging and he may be able to find out who Peter’s father is. If someone like Griffin (Matt Cohen) can uncover the secret, it shouldn’t take a pro like Curtis long to figure it out. Once Nina finds out Valentin has been in cahoots with Faison’s (Anders Hove) son, she’ll hit the roof!

Peter’s actions set Nathan’s (Ryan Paevey) death in motion, so Valentin’s ties to him are sure to horrify Nina. She’ll feel like Valentin played a role in her beloved brother’s death. General Hospital spoilers say Valentin will have to pay the price for his partnership, so stay tuned.

Are you looking forward to all the exciting revelations? Will Nina wash her hands of Valentin for good? We’ll give you updates as other GH details emerge. Stick with the ABC soap and don’t forget to check CDL often for the latest General Hospital spoilers, updates and news.