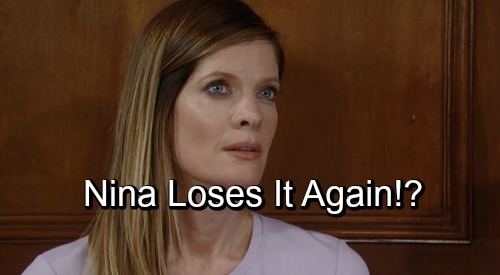 General Hospital (GH) spoilers tease that Nina Reeves (Michelle Stafford) will remain on an emotional roller coaster. She’s been through a lot lately, but there’s much more drama to come. Could Nina take a ride on the crazy train again? Thanks to all the stress she’ll be facing, that’s certainly a possibility.

On September 25, Stafford answered an intriguing question on Twitter. A fan asked if Nina might “wig out” once more. Nina often seems on edge and perhaps a bit unstable, so people are wondering. Stafford replied, “Hahahah! Yes!” There’s no way to tell how far GH might take this, but Stafford’s confirmation points to some potential craziness. Nina may go off the rails before you know it!

Nina has definitely had some nutty moments since arriving in Port Charles. For example, she faked paralysis after coming out of her coma and tracking down her ex-husband, Silas Clay (Michael Easton). Nina got around town in a wheelchair for at least a couple months longer than necessary.

This was shortly after Sam McCall (Kelly Monaco) and Silas went looking for Nina. After finding out she had been placed in the Crichton-Clark clinic in upstate New York, the duo came up empty. Madeline Reeves (Donna Mills) than came to Port Charles and announced Nina had died, but she revealed to Nathan West (Ryan Paevey) that her daughter was alive. 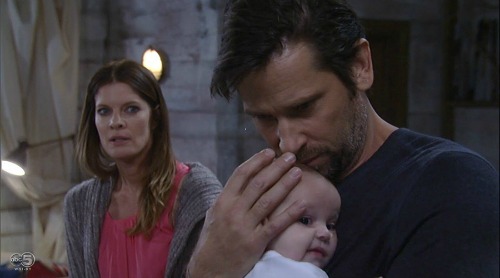 Nina ultimately shocked Silas by resurfacing and seeking revenge. She also went after Ava Jerome, Sam, Madeline and even Kiki Jerome (Kristen Alderson back then, Hayley Erin now). Kiki was mostly just caught in the mess, but GH could revisit old wounds if Kiki turns out to be Nina’s daughter.

After more of Nina’s antics, Madeline murdered Silas and landed behind bars for it. Of course, that didn’t stop Nina’s path of destruction. She later trapped a pregnant Ava in her apartment and sought vengeance. Nina wanted to make Ava pay for giving birth to Silas’ child since she supposedly miscarried her own. That’s why Nina was determined to take Ava’s baby with Sonny Corinthos (Maurice Benard).

Once Ava was paralyzed by a shot, labor was induced and Avery Corinthos (Ava and Grace Scarola) was born. Nina delivered the baby and took her on the run with Franco Baldwin (Roger Howarth). That led to Nina being committed, which brought plenty of Shadybrook Sanitarium chaos. Could Nina wind up back there again? What about Ferncliff?

Anything’s possible, but let’s hope Nina won’t completely lose it. Her daughter’s going to need her in the coming months. Nevertheless, viewers should be prepared for just about anything on a soap!

Nina’s been trying to stay on a better road, but General Hospital fans know what she’s capable of. GH characters sometimes backslide into terrible habits, so you never know what the show’s cooking up. Do you think Nina will revert to some crazy behavior?