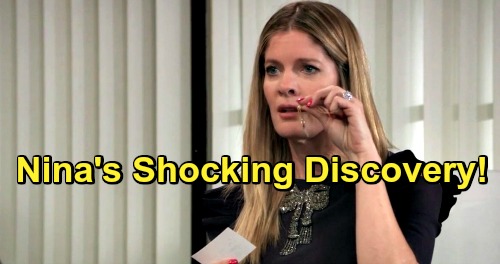 General Hospital (GH) spoilers tease that Nina (Michelle Stafford) will face a major shocker. She’ll discover something stunning on December 19, so what might she stumble across? It’s possible GH will finally get back to that heart pendant. The other half is still out there somewhere and chances are good it’s closer than Nina thinks.

It’d be interesting for Nina to see someone wearing the missing piece of this pendant soon. She’s fully convinced that Sasha (Sofia Mattsson) is her biological daughter. Nina has no reason to doubt it thanks to Valentin’s (James Patrick Stuart) scheme and the DNA evidence.

Plus, there must be loads of pendants just like that all over the world. Plenty of people have heart necklaces that fit together in two pieces. It’s a common expression of friendship or a close family bond. Nina will be taken aback if she spots another woman in town wearing one, but he could easily tell herself it means nothing.

However, the seed of doubt would be planted and it just might grow over time. General Hospital spoilers say Valentin will pull Nina toward him in the coming weeks. They’ll build toward the reunion he’s dreaming of, but his plot will inevitably derail that plan. Valentin may not count on that heart pendant getting in the way.

Of course, we have to wonder who the missing piece belongs to. Willow (Katelyn MacMullen) is the most likely option since she’s in the right age range and has already clashed with Nina. GH may have set up hostility between them in preparation for the big bombshell.

Nina will probably be interacting with Willow again over Charlotte’s (Scarlett Fernandez) issues, so maybe Willow will be wearing the necklace. Perhaps her adoptive mother even lied to her about the story behind it. That could be another GH tactic to throw Nina off the trail.

Nelle (Chloe Lanier) is a long-shot possibility in this daughter storyline. Nina obviously wouldn’t see her wearing the necklace, but Nelle was Charlotte’s nanny for a while. She might’ve left some of her stuff at Wyndemere long ago. As Nina gets closer to Valentin and spends more time there, she might make the pendant discovery. Nina could even ponder the mystery of who left it there for a while.