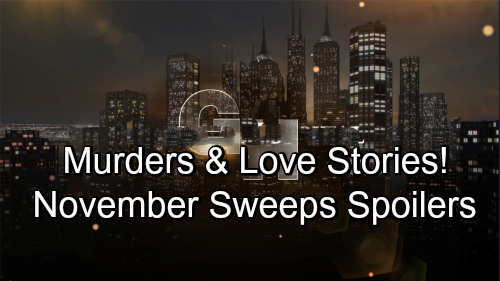 General Hospital (GH) spoilers tease that some stunning twists and turns are coming up. The month ahead will bring plenty of bombshells, so it’s time for a sneak peek of all the action. We’ve got a November sweeps preview for curious GH fans. Let’s jump in and see what’s cooking on the ABC soap.

First, we should talk about Laura (Genie Francis). She’ll have a lot on her plate as she kicks off her write-in campaign and deals with some family drama. Ryan (Jon Lindstrom) will be thrilled to have Laura off his back for a while. He’ll turn his attention to Ava (Maura West), who’ll be more than willing to keep opening up.

Of course, Ava will work on her scheme to drive Griffin (Matt Cohen) and Kiki (Hayley Erin) apart. She’ll hope to use Sasha (Sofia Mattsson) for that, but her plan could hit some snags. Back with Ryan, his craving for deadly mayhem will grow stronger. It won’t be long until we see a startling demise.

General Hospital spoilers say Mary Pat (Patricia Bethune) will stir up trouble for Ryan, so that won’t work out well for her. She’ll most likely find herself dead soon, but what about Kiki? GH buzz still points to a fatal exit for her, too. Ava will start to get nervous as “Kevin’s” interest in her intensifies, but she’ll have no idea what he’s really capable of.

Ryan will deal with a Ferncliff hiccup as well. Carly’s (Laura Wright) worried about that mystery patient and anyone else who might be in a similar boat. She intends to visit the mental institution with Laura, so Ryan may have to think fast. He’ll either need to talk them out of it or make sure Kevin’s (Jon Lindstrom) too drugged to know they’re around.

Nevertheless, Laura and Carly could take a step toward the truth. Speaking of the truth, Brad (Parry Shen) will confide in Britt (Kelly Thiebaud). He’ll divulge a huge secret, so this is likely about the baby switch. As Michael’s (Chad Duell) downward spiral continues, Brad’s guilt will rev up. At least he’ll have Britt in his corner!

Other General Hospital spoilers say Anna (Finola Hughes) and Finn’s (Michael Easton) relationship will deepen. Can their romance survive the shockers that’ll inevitably strike? Finn’s past with his family is beyond complicated, so there could be “Fanna” issues as everything starts to unravel. Anna’s plans will definitely make a few waves.

Elsewhere, Spencer (Nicholas Bechtel) will get sneaky. Charlotte (Scarlett Fernandez) will become part of his plot as she discovers what he’s up to. She’ll also be involved in Aiden’s (Jason David) storyline. Is Charlotte to blame for Aiden’s withdrawal from the class? Could she at least know why Aiden’s distancing himself?

As Nina and Valentin’s romance threatens to reignite, so will Jason (Steve Burton) and Sam’s (Kelly Monaco). However, they all have an obstacle or two left to tackle. Sonny (Maurice Benard) will also team up with Margaux (Elizabeth Hendrickson), so enemies will become allies – albeit not friendly ones!