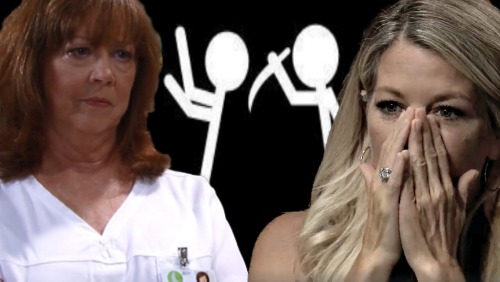 General Hospital (GH) spoilers tease that a familiar face will soon be back on canvas. Nurse Mary Pat (Patricia Bethune) will be returning to GH beginning on October 29. Mary Pat was the nurse at Ferncliff who got a sick joy out of tormenting and abusing Carly (Laura Wright).

Patricia Bethune, who portrays Mary Pat, posted a photo on Instagram of her legs and feet in which she’s clearly wearing a nurse’s uniform and shoes, along with the following message: “Set your schedule dvr for Halloween week. #nursemarypat is back!!! #marypat #generalhospital #halloween #uhoh”

So, where will Mary Pat turn up? She could be back at Ferncliff, although it was mentioned on the show that Ferncliff had a big staffing overhaul after Carly’s (Laura Wright) close brush with Dr. Lasiris (Casey Biggs) and his experimental electroconvulsive treatments. Perhaps Mary Pat was suspended for a while but she’s back now.

If Mary Pat’s back at Ferncliff, she could get involved in the Kevin/Ryan (Jon Lindstrom) drama. She might notice some changes in the “dangerous patient” who is now Kevin and be persuaded to help him…or she could simply help make his life more miserable. Of course General Hospital buzz indicates that Mary Pay is likely to be Ryan’s first murder victim as she gets a little too close to Kevin and learns too much!

Or will Mary Pat somehow come back to haunt Carly? It’s always possible that she could turn up as a nurse at General Hospital. There, she’d be sure to run into Carly and her family and could subtly (or not so subtly) continue to torment her former patient.

The latter might be a distinct possibility, since GH spoilers say that Carly will continue to struggle with what happened to her at Ferncliff down the road. If Mary Pat pops up in Carly’s orbit – like at General Hospital – it might trigger some emotional difficulties in Carly. Mary Pat could cause Carly to experience some awful flashbacks!

Are you excited to see the evil Mary Pat back on GH? Stay tuned to the ABC soap and don’t forget to check CDL often for the latest General Hospital spoilers, updates, and news.