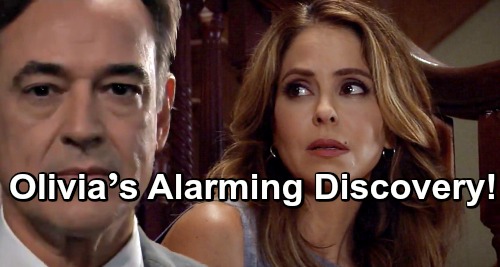 General Hospital (GH) spoilers tease that Ryan (Jon Lindstrom) could be out for blood again. He’s a vicious man with deadly desires, so it makes sense that he’ll plot another murder soon. Halloween brought the stunning demise and decapitation of Mary Pat (Patricia Bethune). Ryan caused chaos by putting Mary Pat’s head in the apple-bobbing barrel at the fundraiser.

The rest of Mary Pat turned up at Ava’s (Maura West) gallery with clumps of Carly’s (Laura Wright) hair in her hands. It’s clear that Ryan’s one messed-up individual! That became even more apparent when Ryan calmly killed Kiki (Hayley Erin) before jumping in bed with her mom. The incident went down on Thanksgiving, so Christmas is a good fit for another murder if Ryan sticks with his pattern.

Of course, holidays can be spread out over several episodes in the soap world. Christmas could stretch for a few days, so we’d still get plenty of warm moments before the shocker. More evidence is surfacing regarding this Christmas killing idea, so let’s talk about it. It’s nice to be prepared for any potential chaos!

General Hospital spoilers say Kevin (Jon Lindstrom) will face an unpleasant visit on December 27. He’ll have to deal with someone he’d rather not see. Kevin would be happy to get a visit from just about anybody besides Ryan. His brother is the only one who would show up and not offer help, so we’ve undoubtedly found our unpleasant visitor.

After Ryan’s showdown with Kevin, he could be awfully riled. Ryan might need to blow off some steam. Most people would just head to the gym or squeeze a stress ball, but Ryan isn’t like most people. Murder is his stress reliever of choice, so could he channel all that anger and target someone in town?

Here’s where things get tricky. Shelly Altman, one of GH’s co-head writers, talked about Kiki’s death in an interview with Soap Opera Digest. She indicated that Kiki was killed off because they wanted “one of Ryan’s victims to be someone who mattered quite a bit to a lot of different people on the canvas – and Kiki certainly fit that.” Notice that she said one of Ryan’s victims.

Does that mean Ryan’s future victims won’t matter as much? Kiki definitely seemed like the biggie when it comes to all this murder mayhem. However, it’s tough to believe GH would unleash a serial killer on Port Charles and have him stop at only two victims. Perhaps they’ll just take a step backward and go for a victim who isn’t as crucial as Kiki.

Regardless, General Hospital spoilers say Olivia (Lisa LoCicero) will make a startling discovery on December 28 – the day after Ryan’s agitating confrontation with Kevin. Is there a connection here? It’s certainly a possibility to consider. GH doesn’t use Olivia much, so why not throw her in the story and let her discover some bloody corpse?

General Hospital fans will be eager to see how it all plays out. We’ll give you updates as other GH news comes in. Stay tuned to the ABC soap and don’t forget to check CDL often for the latest General Hospital spoilers, updates and news.