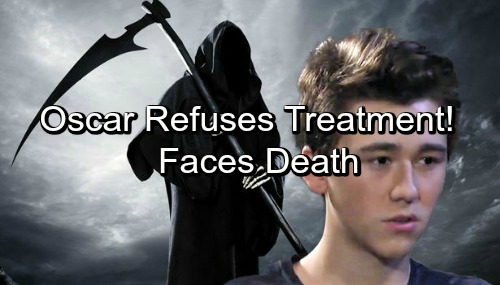 General Hospital (GH) spoilers tease that Oscar (Garren Stitt) will continue to reel from the news that he has terminal cancer. Oscar’s dealing with a lot of feelings right now. He’s obviously upset that he’s dying, but he’s also furious with his parents for keeping his condition a secret from him. In many ways, he feels out of control of his life, and those are pretty scary feelings.

He, Kim (Tamara Braun), and Drew (Billy Miller) have met with Dr. Randolph (Cassandra James) and gone over all the options. Since Oscar’s tumor is inoperable and chemo doesn’t seem to work on his type of tumor, a clinical trial is really the only treatment option. But there are serious risks involved with the trial, including the risk of death.

Kim and Drew have given the clinical trial a lot of thought, and they’ve decided that it’s worth it if it can buy Oscar some more time. If he lives a bit longer, perhaps a better treatment for his tumor will be developed in the meantime. Plus, they’ll get more time with their son, and that’s of course very important to them.

But what they didn’t count on was Oscar having radically different wishes for how he wants to live out the rest of his days. Oscar did his research on the clinical trial, and he didn’t like what he found. There are serious risks that go along with being a patient in a clinical trial. Plus, Oscar realizes that the clinical trial will likely only buy him a little extra time; it won’t cure him.

GH spoilers say that Oscar will come to feel trapped, and it may be the result of his parents’ pressure on him to join the clinical trial. Kim and Drew are only human, and they naturally want what’s best for Oscar, and to them that’s for him to seek treatment any way he can. But Oscar may see that as pressure to do something he’s not sure he wants to do.

Oscar may feel that if it’s a sure thing that he’s going to die, then he should live out the rest of his days doing what he wants to do, rather than spend his days being a patient in an experiment that’s ultimately not going to work. It’s a choice that many cancer patients make for themselves, and Oscar may decide that this is what’s best for him.

But that’s going to be tough on Kim, Drew, and everyone else who cares about Oscar. It may raise some interesting questions, like who has the ultimate choice here, Oscar or his parents? Perhaps they’ll be able to work through their trust issues and get to a place where the three of them decide together what to do after some thoughtful consideration.

Do you think Oscar will opt for the clinical trial? Stay tuned to the ABC soap and don’t forget to check CDL often for the latest General Hospital spoilers, updates, and news.