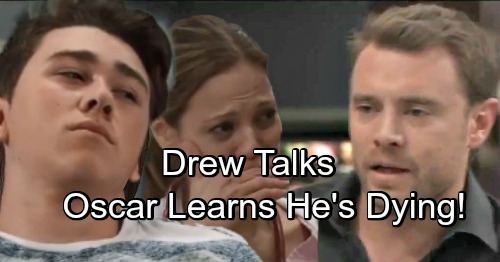 General Hospital (GH) spoilers tease that Oscar (Garren Stitt) will battle some suspicions. It’s surprising he doesn’t have them already – or maybe he does. Oscar attributed his recent collapse to low blood sugar and not eating right. However, the teen may have his doubts deep down.

Kim (Tamara Braun) told Drew (Billy Miller) that she’d managed to keep Oscar’s diagnosis a secret so far. She suggested that Oscar thinks she’s just an overprotective mom. Kim was able to explain away all the tests with that excuse. At least that’s what she thinks.

Oscar’s a pretty smart kid, who’s on the verge of becoming a man. It’s hard to buy that a high schooler had no inkling about his condition. If Kim’s been forcing him to visit specialist after specialist, shouldn’t Oscar be wondering what’s really going on? Perhaps he doesn’t want to face the facts.

Regardless, Oscar will ultimately determine that he needs the whole truth. It looks like he’ll push Drew to fill him in next week. Oscar will undoubtedly ask his dad to be straight with him. He’ll understand that it’s too tough for Kim to come clean, but he’ll think Drew can grant this request.

Oscar will seek a man-to-man discussion that will rock him to the core. At some point, General Hospital spoilers reveal that Oscar will learn his devastating diagnosis. He’ll be crushed by his inoperable brain tumor, but it seems he’ll handle the news well.

Oscar will likely get started on a bucket list and get his final affairs in order. If he only has a few months to live, he’ll want to make them count. Oscar will also want to be sure he has everything squared away when he passes. GH spoilers say he’ll be most concerned about leaving Josslyn (Eden McCoy) behind.

There’s still a glimmer of hope thanks to Terry’s (Cassandra James) involvement, but Oscar won’t hold his breath. As for Kim, she’ll be furious with Drew on next week’s new episodes, September 10-14. That’s why it makes sense that Drew will be the one to fill their son in. General Hospital spoilers hint that Drew will defend his actions. He’ll probably argue that he couldn’t look Oscar in the eye and lie to him.

Kim may eventually see that it was the right call. Oscar deserves the opportunity to say his goodbyes and die on his own terms. Will Oscar indeed face a grim outcome. Will Terry come through for him after all? We’ll give you updates as other GH details emerge. Stay tuned to the ABC soap and don’t forget to check CDL often for the latest General Hospital spoilers, updates and news.