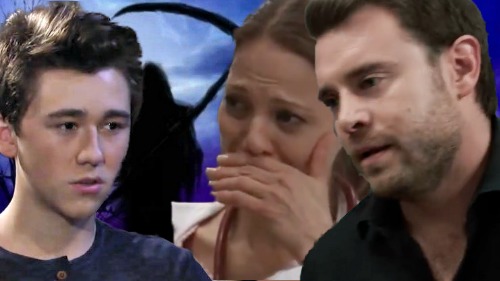 General Hospital (GH) spoilers tease that Drew (Billy Miller) and Kim (Tamara Braun) will revisit the topic of Oscar’s (Garren Stitt) condition. He’s got an inoperable brain tumor, so it’s causing some tension between his parents. Kim wants Oscar to live life to the fullest, even if he’s only got a few months left. Drew, on the other hand, thinks Oscar should decide for himself how to spend that time.

GH fans can expect some doubt to creep up for Kim. She’ll begin to wonder if maybe Drew’s right. However, Kim will ultimately determine that they should stick to the plan. Deep down, she’s probably just dreading the look she’ll see in Oscar’s eyes. How can she tell her son that he’s dying and she can’t fix him?

Drew will reluctantly keep up his support, but their charade should fall apart soon enough. General Hospital spoilers say Oscar will start to question their behavior. He’ll feel like his mom and dad are keeping something from him. Oscar won’t know what it is, but he’ll guess that it must be serious. Since he won’t get anywhere with Kim and Drew, Oscar will decide to turn to someone else for answers.

General Hospital spoilers say Sam (Kelly Monaco) will surprised when Oscar corners her. He’ll want to know if she has any idea what’s going on. Sam may play dumb or suggest that she just doesn’t want to get involved. She could argue that what Oscar’s parents do is their business. Sam could ask Oscar to leave her out of it since it’s a tricky situation. She doesn’t want to step out of bounds with Drew.

Oscar will likely leave without any more information than he started with. Nevertheless, he won’t give up on learning the truth. General Hospital spoilers say Oscar will get some stunning news soon. He might overhear his diagnosis or perhaps pry if out of his parents somehow. Either way, Oscar’s going to be both devastated and furious. He’ll wonder how they could keep something so huge from him.

As Oscar processes the idea of his imminent death, he’ll lash out at Kim and Drew. It seems likely that Kim will get the worst of Oscar’s anger. She’ll undoubtedly explain that Drew wanted to come clean. Kim won’t want Oscar to blame his father, who truly wanted to bring his son in the loop.

As for tearful Kim, she’ll do her best to explain her actions. General Hospital spoilers say Kim will be desperate to offer comfort and hopefully find forgiveness. Oscar should calm down eventually, but his devastation will remain. He’ll have to come to grips with his life being cut short, but GH viewers will hold out hope for a miracle!

It sounds like this storyline will continue to bring crushing drama. We’ll give you updates as other GH details emerge. Stay tuned to the ABC soap and don’t forget to check CDL often for the latest General Hospital spoilers, updates and news.