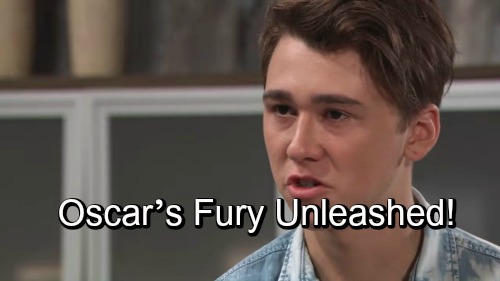 General Hospital (GH) spoilers tease that Cameron (William Lipton) will lose control of a situation this week. He’s wrapped up in the conflict between Oscar (Garren Stitt) and Josslyn (Eden McCoy), so this undoubtedly involves them. Cam will act on an impulse this week, so that could mean a couple different things.

Since Oscar’s trying to push Joss away, Cameron might steal another smooch. After all, he helped Oscar by photoshopping a picture of him with another girl. Cameron might take his chance with Josslyn as she struggles to cope. Then again, Cam may decide he’s done with all the lies. He knows the real reason Oscar’s trying to make Josslyn hate him, so he may choose to come clean.

Cameron warned Oscar that if his latest plan didn’t work, he’d have to tell Josslyn the truth. General Hospital spoilers say Josslyn will put a plot in motion soon. That could be a sign that she’s not giving up, so Cameron may ultimately be the one to fill her in. Oscar’s tactics just aren’t working. It’d be better for Cam to fill Joss in so she can help Oscar through this. It would certainly ease her pain, too.

On October 24, GH spoilers state that Oscar will get fierce! He’ll be furious with Cameron and a confession may be why. If Cam reveals Oscar’s cancer diagnosis, that’d definitely be a reason for Oscar to get upset. He wants Josslyn to remember him as her first love, not the guy she watched die in front of her.

Furthermore, Oscar doesn’t like the idea of seeing pity in Josslyn’s eyes. If Cameron blows all this up, Oscar may end up keeping Joss at a distance anyway. During the week of October 22-26, Oscar will also deliver a shocking blow to Drew (Billy Miller). His outbursts will probably continue, so Drew and Kim (Tamara Braun) will need to do something about this. They can’t let Oscar keep spiraling.

Jason (Steve Burton) will turn to Monica (Leslie Charleson) for a favor as well, so maybe he’ll even pitch in. Oscar needs all his family and friends to come together right now. He may feel backed into a corner at first, but it’ll be for the best in the end. Oscar needs as many people as possible on his side right now.

Will Josslyn finally get a clue and find a way to assist Oscar? Will his loved ones be able to get through to him? Who will ultimately talk Oscar into undergoing the experimental treatment? We’ll give you updates as other General Hospital news comes in. Stay tuned to ABC’s GH and don’t forget to check CDL often for the latest General Hospital spoilers, updates and news.