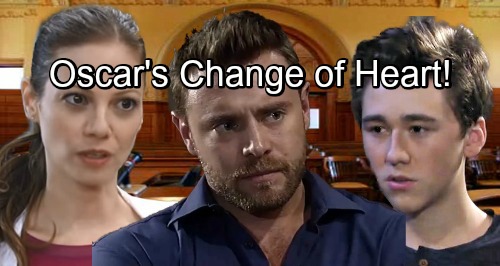 General Hospital (GH) spoilers tease that Oscar’s (Garren Stitt) cancer will continue to cause turmoil. Drew (Billy Miller) and Kim (Tamara Braun) are really struggling, especially now that Oscar’s seeking emancipation. They can’t even watch out for him since he’s so focused on independence.

Kim and Drew feel like their last months with Oscar are slipping through their fingers. As a result, they’ll start leaning on each other more and more. General Hospital spoilers say November will bring Drew and Kim much closer. These parents will form a stronger bond, so that could mean a romance is brewing.

GH kept Drew in Margaux’s (Elizabeth Hendrickson) orbit for a while and that may come back around eventually. However, she’s pretty wrapped up in Sonny (Maurice Benard) drama at the moment. Drew’s certainly not too fond of Margaux right now anyway!

As for Sam (Kelly Monaco), she’ll keep growing closer to Jason (Steve Burton) in the weeks ahead. It looks like we’re inching back toward “JaSam” and not “Dream.” Drew’s two other love interest options are out for the time being, so why not stick him with Kim for a while? It makes sense thanks to the story they’re in together. Drew and Kim fear their child’s dying, so they may find comfort in a romance.

General Hospital spoilers say Julian will get caught up in some Alexis (Nancy Lee Grahn) stuff soon. He’ll develop suspicions and try to get to the bottom of them. There seems to be a huge Cassadine story cooking, so this could involve that. Then again, this might be about the birth mother and an unexpected twist in Brad’s (Parry Shen) story.

Regardless, Julian will be distracted by his ex and that could spell trouble for his current relationship. While he’s busy dealing with Alexis issues, Kim may be busy reconnecting with Drew. Of course, it’d be a reunion for her and brand-new for him. Drew doesn’t remember their previous fling, but that doesn’t mean he can’t enjoy it this time around.

This could actually become a crucial part of Oscar’s story. Ever since Drew entered his life, Oscar’s wanted to be a real family. He’s warming up to Julian, but he’d rather see his parents back together. Oscar’s shifted his focus lately, but Drew and Kim’s relationship might draw him back in. If he sees that his dream family could actually become a reality, could Oscar shift his perspective?

Oscar might decide he’s got a lot to live for. There’ll undoubtedly be other factors if Oscar changes his mind, but Kim and Drew’s romance could still be a big one. Regardless, General Hospital spoilers say Oscar may relent and go for the clinical trial. Can this experimental treatment save Oscar’s life?

It sounds like more medical bombshells are looming. We’ll give you updates as other GH news comes in. Stay tuned to the ABC soap and don’t forget to check CDL often for the latest General Hospital spoilers, updates and news.