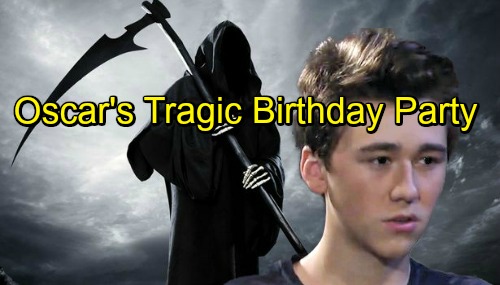 General Hospital (GH) spoilers tease that Kim (Tamara Braun) and Drew (Billy Miller) will focus on their goal. Despite Drew’s misgivings, he’s backing Kim up on her delayed confession. They intend to wait and tell Oscar (Garren Stitt) the truth after his birthday.

Kim just wants Oscar to enjoy one more year of cake and presents without a tumor cloud hanging over him. No one can blame Kim for that, but there are problems with this plan. For starters, Drew feels like it’s dishonest. Oscar’s a teenager, so he’s on the verge of becoming a man. He may never make it that far if the tumor kills him, but the point is he’s nearly an adult.

Oscar deserves the chance to process this news and prepare for his demise. Kim and Drew are robbing their son of that opportunity. However, the bigger issue is the spreading secret. Sam (Kelly Monaco), Liz (Rebecca Herbst) and Franco (Roger Howarth) were recently brought in the loop. Too many people know what’s up, so this is getting risky.

Thanks to Franco’s suspicious phone call and the brain tumor web page he left up, Cameron (William Lipton) seemingly knows as well. The secret is destined to be exposed soon. It’d be better for Drew and Kim to explain this to Oscar themselves. Instead, he may overhear the shocker or have it blurted out to him by his rival.

Since we know Oscar has a birthday coming up, GH could even drop the bomb at his party. A deadly diagnosis is the last thing Oscar would want on this special occasion, but that may be exactly what he’ll get. His b-day may be poised to bring a total nightmare!

Will Oscar learn the truth at his birthday bash? Will he explode at all the liars and cause a scene? How will Josslyn (Eden McCoy) handle this terrible development? General Hospital spoilers state that some tough moments are ahead. Oscar will have a lot to deal with as he tackles this awful crisis and accepts his face.

It sounds like some gripping episodes are coming up on GH. We’ll give you updates as other General Hospital details emerge. Stay tuned to the ABC soap and don’t forget to check CDL often for the latest General Hospital spoilers, updates and news.