General Hospital Spoilers: Peter Forces Maxie to Run Away with Him – Fears Exposure as Heinrik, Abducts His Love in Desperation 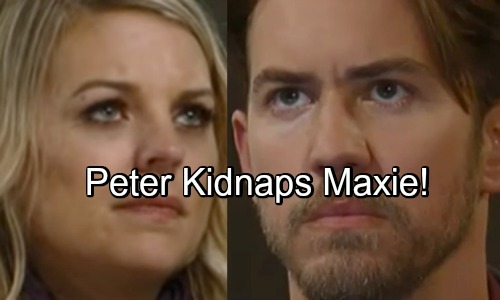 General Hospital (GH) spoilers tease that Peter (Wes Ramsey) will soon be backed into a corner. The walls are already starting to close in, but Peter just won’t listen to those who try to warn him. Valentin (James Patrick Stuart) has repeatedly urged Peter to leave Port Charles. Griffin (Matt Cohen) will also give a major warning on the new GH episode May 15. He’ll think Peter needs to leave town while he still can.

Of course, Peter will insist on remaining in PC with Maxie (Kirsten Storms). She’s the only thing that makes him want to plant roots. In Peter’s mind, he probably thinks they’re going to live happily ever after. Peter hasn’t admitted his apparently deep feelings for Maxie yet, but that could change in the near future.

GH fans know Maxie and Peter are set to attend the Nurses Ball together. General Hospital spoilers say there’ll be a declaration of love at this big event. Perhaps Peter won’t be able to hide how he feels anymore. He may pour his heart out to Maxie and hope that she cares about him in the same way.

There’s a chance that the Heinrik hunt will force this confession. Jason (Steve Burton) and Spinelli (Bradford Anderson) will make some progress with the investigation. Sam (Kelly Monaco) will find a new clue on the Peter end, too. They’re all trying to connect the dots, but these storylines revolve around the same person. Finding out the truth about Peter means finding out the truth about Heinrik.

Peter will realize his mother could pose a risk as well. Anna’s (Finola Hughes) been in touch with Heinrik, but neither one of them knows the whole story yet. When that revelation hits, Peter’s sure to be even more concerned. He’ll want revenge, but protecting his romance with Maxie will be his priority.

Plus, Peter clearly doesn’t trust Valentin. That’s why he refused to divulge any email news. Valentin would throw Peter under the bus in a heartbeat if it would benefit him. Griffin could also be on the verge of cracking, so Peter may start to panic. Threats are coming at him from every angle, so how’s Peter going to preserve his future with Maxie?

Peter might make a shocking suggestion to the woman he loves. After sharing his feelings, Peter could allude to his troubled past and the people out to get him. He could beg Maxie to start a new life with him elsewhere. Maxie would undoubtedly turn down that offer and push Peter to explain why he’s so upset. She wouldn’t go anywhere without knowing more about Peter’s problems.

Peter may not handle Maxie’s rejection very well. He wouldn’t want to share the Heinrik details either. Will Peter prove he’s an obsessed monster like his father, Faison (Anders Hove)? Will he force Maxie to leave with him despite her refusal?