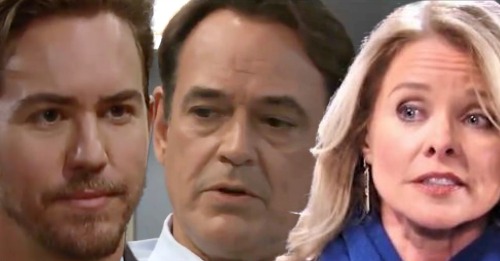 General Hospital (GH) spoilers tease that Ryan Chamberlain (Jon Lindstrom) is about to start a new crime spree. Naturally, his main target will be Felicia Scorpio (Kristina Wagner). It’s obvious that Ryan’s quite obsessed with Felicia. He’s been gazing at her photo on Dr. Kevin Collins’ (Jon Lindstrom) laptop, so he’s clearly fixated and up to something. Ryan’s next plot is sure to bring danger and destruction!

Ryan may start his new campaign of murder and mayhem right after Lulu Falconeri’s (Emme Rylan) story hits the newsstands. She’s working on a piece about the anniversary of his horrible crimes, which Ryan seems happy about. After all, Ryan is a narcissistic sociopath. He craves attention and has a total lack of concern for others. Ryan clearly has no compassion for the victims he brings misery to.

Everyone in Port Charles believes Ryan’s been dead for over 25 years, so this presents an interesting opportunity. Ryan has been working hard to learn Kevin’s mannerisms and routine. He feels certain he can convince everyone he’s the real Kevin.

Ryan will hope to get away with as many crimes as possible thanks to his clever charade. He can do pretty much whatever he wants as long as people think he’s kind and generous Kevin. No one will suspect that Ryan’s causing all the trouble – at least not at first.

When the crime spree begins, the PCPD will be clueless about the perpetrator. Jordan (Briana Nicole Henry) may think the Ryan anniversary edition led to a copycat. Ryan might try to commemorate his own deadly actions by recreating some of his past crimes. General Hospital fans will recall that Ryan murdered his wife, Gloria, back in Texas. Unfortunately, Felicia witnessed that horror show.

Ryan also killed Connie Cooper, a counselor who helped him escape an asylum. Plus, he kidnapped Felicia twice and plotted her murder. Georgie Jones (Lindze Letherman) was a kidnapping victim as well, so Ryan had a long list of evil deeds.

Ryan even held Felicia hostage at her wedding to Mac Scorpio (John J. York) and tried to bomb their wedding! General Hospital spoilers hint that Ryan may have another abduction scheme in mind. GH viewers certainly expect Ryan to go after Felicia again, so kidnapping her seems inevitable.

However, Ryan’s scheme could hit a huge snag. Let’s consider the publisher of this anniversary edition. Peter August (Wes Ramsey) is awfully close to this story, so he could pick up on some clues. It’s possible that Maxie Jones (Kirsten Storms) will even be kidnapped along with Felicia. That’d give Peter another reason to insert himself in the peril.

This could all set the stage for a rescue mission by Peter, who may be the one to save Felicia and possibly Maxie. Peter could even expose Ryan’s true identity and save more potential victims. Others in Port Charles may have suspicions, but Peter could ultimately bring the real facts to light.

If General Hospital lets this version of the events play out, Peter could find redemption and earn the title of hero! We’ll give you updates as other GH news comes in. Stick with the ABC soap and don’t forget to check CDL often for the latest General Hospital spoilers, updates and news.