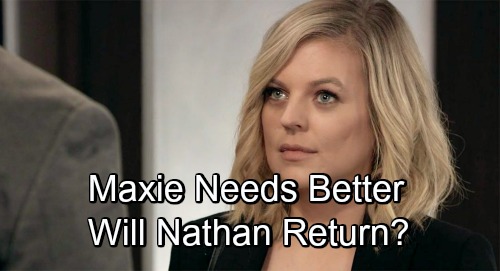 General Hospital (GH) spoilers tease that Maxie (Kirsten Storms) will battle some conflicted feelings. She’ll feel torn as she continues to fall for Peter (Wes Ramsey), but it won’t be because of his mistakes. Maxie seems to have moved past Peter’s wrongdoing. She understands that he’s not his ruthless father, Faison (Anders Hove), and she’s willing to give him another chance.

GH appears to be building toward a romance for Peter and Maxie, but they’ll encounter some problems. Maxie will be haunted by memories of Nathan (Ryan Paevey). Her deceased husband would be fine with her moving on, but this is about Maxie and what’s in her heart. She hasn’t fully let go of Nathan yet, so it’ll be tough for her to open herself up to another love story.

Nevertheless, Maxie should get over that hurdle eventually. Once she’s ready to take the leap, General Hospital may go all in on Maxie and Peter. Of course, we have to wonder if that’s the right choice. Is Peter really the best match for Maxie or is there a better option out there?

GH has been keeping Michael (Chad Duell) in Maxie’s orbit lately. They always find ways for Michael to cross paths with Maxie and dote on little James. Their friendship has strengthened and plenty of fans see sparks. Michael and Maxie could certainly be a couple possibility down the road.

General Hospital has seemingly chem tested Chase (Josh Swickard) and Maxie as well. If GH took this route, Maxie would be falling for the detective who took Nathan’s place. That’d be awfully soapy! It would rev up Maxie’s conflicted feelings even more.

There’s one other option we should consider. The dead rarely stay dead on a soap, so never say never on Nathan’s comeback. Should GH work on convincing Paevey to return? Even if they can’t pull it off, they could always recast. It’d be easy to argue that Nathan’s death was faked along with Faison’s. Maybe Nathan’s evil dad is secretly holding him hostage somewhere.

GH viewers saw Nathan presumably headed to heaven with Georgie (Lindze Letherman), but that could’ve been Maxie’s grief-stricken mirage. Nathan could come back once Maxie finally lets herself fall for someone else. That’s how most return-from-the-dead stories tend to go.

What’s the best choice here? Who should Maxie ultimately be paired with? We’ll give you updates as other GH news comes in. Stick with the ABC soap and don’t forget to check CDL often for the latest General Hospital spoilers, updates and news.