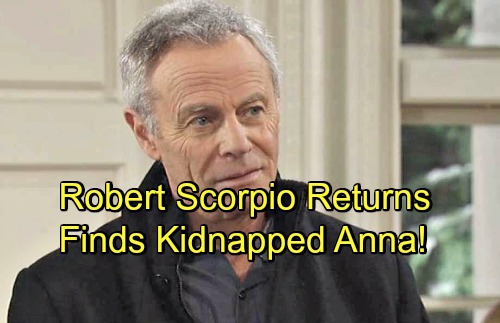 General Hospital (GH) spoilers tease that a fire at the Wyndemere stables will bring chaos. Peter (Wes Ramsey) will fear for his life, but his rescuers are coming. Valentin (James Patrick Stuart), Finn (Michael Easton), Maxie (Kirsten Storms) and Lulu (Emme Rylan) will all make their way to Spoon Island. Once they see the blaze Liesl (Kathleen Gati) unleashed, they’ll certainly worry about Peter’s fate.

All four of them may help in one way or another, but Finn (Michael Easton) will actually pull Peter from the flames. He’ll save Anna’s (Finola Hughes) son, so that’s fantastic news. Naturally, Finn will want to give Anna updates. She’s been quite concerned about Peter and his whereabouts. Anna wasn’t sure she’d ever see Peter again, so Finn will be happy to report that he’s safe at GH.

Unfortunately, Finn will have trouble reaching Anna. He’s already tried calling her a few times, but he didn’t have any luck. Of course, General Hospital fans know the reason why! Anna was headed to the airport with an armed driver. We caught a glimpse of his gun, so Anna obviously never caught her flight to see Robin (Kimberly McCullough).

Since Anna’s been kidnapped, this will kick off a whole new phase of the story. Finn will shift from one desperate mission to another. He’ll definitely need some assistance, so that’s where Robert Scorpio (Tristan Rogers) will come in. General Hospital spoilers say Robert will return on new GH episodes next week, July 23-27. He’ll be back to demand consequences for Peter, but he’ll inevitably get caught up in the case of missing Anna.

Finn and Robert will confirm that Anna didn’t make it to see Robin. From there, they’ll know what they have to do. General Hospital spoilers suggest they’ll team up for a dramatic rescue. Let’s hope it won’t take long to track Anna down!

Finola Hughes recently tweeted about her printer struggles. She asked fans for help with a hole punch loading issue and got it all sorted out. A few days later, Hughes dropped a hint to appease impatient viewers. One loyal Anna fan asked, “When is she back?!!!!!” and added, “I hate when she is on vacation, but….well deserved.”

Hughes did a manual retweet and replied, “Well look, Clearly I was printing something on holes paper the other day.” It sounds like she’s working her way through some new scripts, so Anna’s comeback isn’t too far off! We’ll keep you posted as other GH details emerge. Stay tuned to the ABC soap and don’t forget to check CDL often for the latest General Hospital spoilers, updates and news.