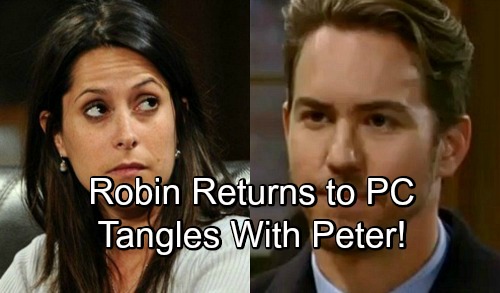 General Hospital spoilers tease that Robin (Kimberly McCullough) will soon be back in Port Charles. Robin has been off canvas since the Nurse’s Ball, when she returned for a brief visit and was shocked to see Robert (Tristan Rogers) suddenly appear to violently confront Valentin (James Patrick Stuart).

Robin’s upcoming visit to Port Charles will be less chaotic than the Nurses Ball, but there’ll still be plenty of drama. Anna (Finola Hughes) will be back after being held captive by some dangerous but still-unknown assailants, and Robin will likely want to check in on her.

Robin will also want to deal head-on with some family drama surrounding her ‘new’ brother, Peter (Wes Ramsey). Robin’s likely still reeling from learning that Anna had another child but kept it a secret all these years. Robin and her mother are very close, and Robin may feel that it’s a betrayal for Anna to have kept something so important from her. The two of them may have some issues to work out.

Robin will also want to meet Peter and get to know him. But will the two siblings have a warm reception? Robin is a genuine and caring person who generally speaks her mind, while Peter is standoffish and manipulative, so that interaction may not go exactly as Robin planned. 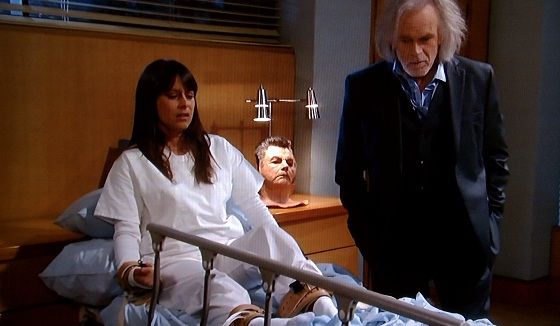 Robin may have to deal with conflicting feelings regarding Peter. Peter is Faison’s (Anders Hove) flesh and blood, and Faison has done considerable damage to her and her family. But Robin will also want some sort of relationship with her brother, so she’ll need to find a way to deal with his connection to Faison.

Peter will set Robin straight on his own feelings towards dear old dad – who he in fact murdered in GH. Jason (Steve Burton) shot Faison but Peter was directly responsible for his death.

Of course, Peter may not make it easy on Robin. Peter’s not Anna’s biggest fan, and he may take a similar disliking to Robin. Robin may face an uphill battle in trying to get to know Peter!

Are you excited for Robin’s return? And how do you think her meet-up with Peter will go? Stay tuned to the ABC soap and don’t forget to check CDL often for the latest General Hospital spoilers, updates, and news.