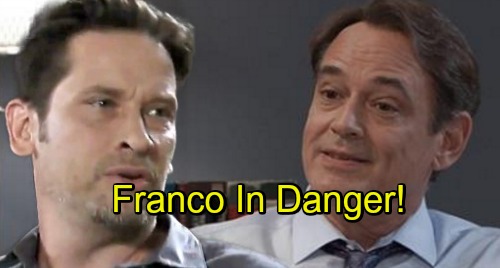 General Hospital (GH) spoilers tease that Franco (Roger Howarth) may get himself into some trouble, and some danger. Franco’s been seeing Kevin (Jon Lindstrom) for therapy sessions for a while now, and the sessions appear to have been productive. Franco’s gotten quite a bit of help from Kevin with adjusting into life with Liz (Rebecca Herbst) and the boys.

But recently, Franco noticed something wasn’t quite right with “Kevin.” Of course, viewers know that’s because Kevin is actually Ryan (Jon Lindstrom). Ryan has Kevin locked up in Ferncliff and has taken over Kevin’s life and patient load at GH. Ryan’s been doing a pretty good job thus far of impersonating Kevin, but he’s had a couple hiccups.

One hiccup occurred during a recent therapy session that Franco had with “Kevin.” Ryan seemed (and was) a bit confused about Franco’s recent problems with Liz’s boys. In typical Franco fashion, he quickly rattled off lots of details and conflicted feelings about his ability to interact with the boys, especially about Cameron (William Lipton). Ryan was a bit “off” and didn’t know how to respond.

Then the topic turned to some of the negative and difficult experiences from Franco’s past, and Ryan offered some very different advice than one would expect from Kevin. Ryan seemed to indicate that one can’t easily overcome the past, nor escape who one’s been in the past. That really threw Franco for a loop, and he let Ryan know it.

How long before Ryan gets irritated with Franco and decides that enough is enough? Ryan could decide that Franco’s had enough therapy and just eliminate him as a patient. Or, it could get more sinister. If Franco keeps on bugging Ryan about seeming different and offering out-of-character advice, Ryan could decide to permanently silence Franco. Franco could wind up stuck in Ferncliff or worse!

Do you think that Ryan poses a threat to Franco? Stay tuned to the ABC soap and don’t forget to check CDL often for the latest General Hospital spoilers, updates, and news.