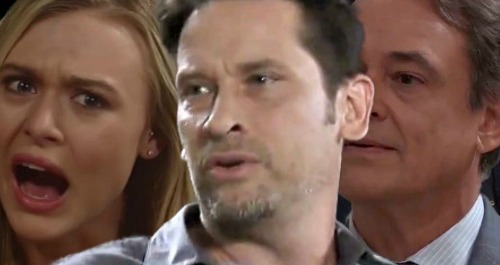 General Hospital (GH) spoilers tease that Ryan’s (Jon Lindstrom) advice will lure Ava (Maura West) into trouble. He’s making her see her dark side as a good thing – or at least as something she shouldn’t be ashamed of. “Kevin” has made it clear that Ava shouldn’t fight her natural impulses. He feels she should explore them and take a closer look what makes her tick.

Of course, that’s an awfully risky strategy. Franco (Roger Howarth) was concerned when heard “Kevin’s” take on he situation. He doesn’t want Ava letting herself fall back into old habits. Franco knows Ava isn’t a saint, but he doesn’t want her to be a full-blown monster either.

That’s especially true when it comes to Kiki (Hayley Erin). Franco will do his best to watch out for her as time goes on. He won’t want Kiki pulled into some revenge plot, but that’s exactly what’ll happen. General Hospital spoilers say Ryan will keep preying on Ava’s weakness. She always holds a grudge, so Ryan will use that to push her toward vengeance.

It sounds like Franco may even get caught in the plan. On November 19, Franco will become a manipulation victim. Ava will influence Franco in a sneaky way, so it may set up a shocker. GH is probably including Franco in all this for a reason. The closer he is to the drama, the more likely it becomes that he’ll be framed for Kiki’s potential murder.

We’re not suggesting that Ava would resort to that. There’s probably no scenario where Ava would ever go as far as killing her own daughter – not on purpose anyway. However, Ava might as well be doing the deed. She’s unknowingly putting Ryan on that deadly path, so she’ll bear some culpability.

As for Franco, he may play some inadvertent role thanks to Ava’s dirty trick. Regardless, Franco will also battle guilt. If Kiki dies, Franco will wish he could’ve somehow saved her. Unfortunately, Ryan may add to Franco’s sorrow by setting him up. Can you imagine how painful that would be? Franco might have to grieve while defending himself.

General hospital fans won’t want to miss the danger and destruction ahead. We’ll give you updates as other GH news comes in. Stay tuned to the ABC soap and don’t forget to check CDL often for the latest General Hospital spoilers, updates and news.