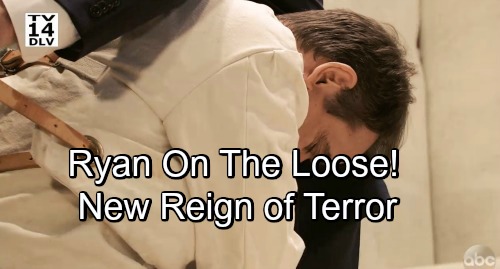 General Hospital spoilers tease that the Kevin/Ryan twin swap story is about to get more complicated. On Friday, August 28, it was revealed that Kevin (Jon Lindstrom) was holding Ryan (Jon Lindstrom) captive in Ferncliff. It seems that at some point Kevin discovered that Ryan was alive and managed to get him confined to Ferncliff. The point? Kevin still holds out hope that Ryan can be rehabilitated and lead a productive life.

Of course, this leaves a lot of questions unanswered. How long has Kevin known that Ryan was alive? Also, why wouldn’t Kevin just go to the authorities when he discovered that Ryan was alive and didn’t burn to death in the Funhouse 25 years ago? Why the need for secrecy? Perhaps Kevin thought that Ryan had burned all his bridges for rehabilitation and would just be sent to prison.

Whatever the case, it looks like Kevin’s plan is going to take a fateful turn. Thanks to the orderly leaving Ryan’s straight jacket a little loose, Ryan was able to wiggle free and sneak up behind Kevin. What will transpire from here? Chances are, Ryan will swap clothes with Kevin, and Kevin will end up in the straight jacket, held captive by Ryan!

So, going forward, it looks like Ryan will be assuming Kevin’s identity in Port Charles. And poor Kevin will be subject to the Ferncliff treatment. Of course, no matter how much Kevin pleads with his orderlies and doctors and tries to explain, nobody will believe him. That will leave Ryan on the loose in Port Charles, and at a very special time for Ryan.

It’s the 25th anniversary of Ryan’s killing spree, and Ryan will soon be reminded of his old glory when The Intruder publishes a big story recounting the events that transpired so long ago. Since Ryan has apparently been locked up for a long time, he may miss the thrill of stalking and killing, and the Intruder article may trigger his desire to kill.

On the other hand, Ryan’s freedom really depends on him blending into the background as “Kevin” and not causing any drama, so he may keep a lid on his homicidal tendencies for a while. But how long will he be able to hold back?

Will Ryan immediately start terrorizing Port Charles, or do you think he’ll be able to get away with impersonating Kevin for a while? Stay tuned to the ABC soap and don’t forget to check CDL often for the latest General Hospital spoilers, updates, and news.