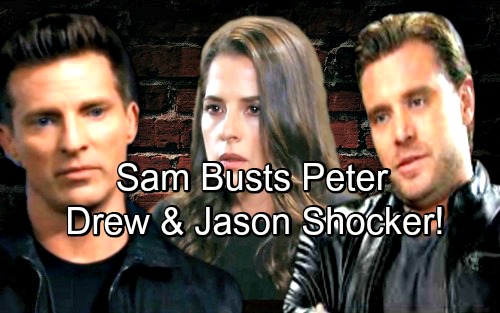 General Hospital (GH) spoilers tease that Sam (Kelly Monaco) will continue to find herself caught in the middle of Jason (Steve Burton) and Drew (Billy Miller). However, it looks like romance won’t be the primary factor. Instead, the drama will center around Peter August (Wes Ramsey) and his connection to both twins.

GH fans will recall that Sam helped Jason out with the Heinrik mission in Switzerland. She recently joined Curtis’ (Donnell Turner) investigation into Peter as well. Sam’s coming at this from two angles, so there’s a good chance she’ll play a role in Peter’s exposure. She’ll stand the best chance at connecting the dots.

General Hospital spoilers say the Nurses Ball will bring plenty of red carpet looks and fantastic performances. Of course, GH viewers may be more interested in the stunning story developments. Some big bombs are about to drop and one of them could involve a major hint about Peter’s true identity.

On May 17, Sam will stumble across something that catches her off guard. It’ll be an important clue, so it makes sense that it’ll relate to Peter. After Curtis found the file on Nathan (Ryan Paevey), Valentin warned Peter about leaving stuff around for anyone to find. Peter assured Valentin that he’d covered his tracks, but has he covered them well enough to hide the truth from Sam?

There’s a flash drive containing Drew’s memories, so Peter surely tucked that away somewhere he assumes is safe. That may not be the case if Sam gets a stroke of good luck and happens to locate it. Perhaps Peter’s hiding spot won’t be as good as he thought. There’s even a chance it’ll be moved and dropped at some point.

Then again, Peter might be cocky enough to still have it hidden his office. Maybe his reassurance to Valentin was just a way to placate his ally. Whatever the case, finding the flash drive would be huge for Drew. If Sam can link this discovery to Peter, that’s even better. She may put the puzzle together and determine that Peter is Heinrik!

Will Sam assist both brothers with her next clue? If so, that’ll just be one more way to draw her back to Drew as well as closer to Jason. General Hospital spoilers say Sam’s love life will remain messy, so we’ll give you updates as other GH news comes in. Stay tuned to the ABC soap and don’t forget to check CDL often for the latest General Hospital spoilers, updates and news.