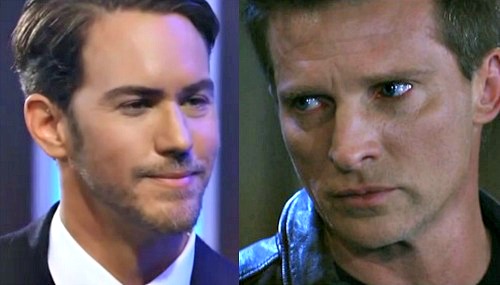 General Hospital (GH) spoilers tease that Peter’s (Wes Ramsey) life is about to fall apart. He’s got a great job as Aurora Media’s COO as well as a budding romance with Maxie (Kirsten Storms). Peter stands to lose everything, which could lead to extreme danger. There’s no predicting what Peter will do when everything comes crashing down.

Peter initially felt guilt over Nathan’s (Ryan Paevey) death, so he decided to offer Maxie support. Now they’re falling for each other, but it seems their relationship will be over before it ever really begins. General Hospital spoilers say Maxie will feel like an idiot when she learns the truth. She’ll see that the signs were there all along.

Naturally, Maxie will want nothing to do with Peter. How can she trust him after he’s told lie after lie? Peter will undoubtedly beg Maxie to let him explain, but she won’t be interested in his excuses. The deception won’t even be the only problem. What Peter’s been deceiving her about will be just as important.

Peter’s connection to Faison will infuriate Maxie. He’ll insist that he hated his father just as much as she did, but that won’t do any good. Maxie may blame Peter for provoking Faison and setting Nathan’s demise in motion. Peter was the reason Faison showed up at Crimson that day. GH viewers will recall that Peter had a bulletproof vest on in preparation. However, Poor Nathan never saw his bullet coming!

General Hospital spoilers suggest that Peter may make a deal to keep himself out of prison. He’ll probably avoid going down for the memory mapping drama and Jason’s (Steve Burton) time in captivity. That flash drive containing Drew’s (Billy Miller) memories could come in awfully handy as leverage.

Still, what kind of life will Peter have without Maxie? He already admitted that he doesn’t do much of anything. Peter just works out, eats dinner alone and watches old sitcoms. Can he go back to his lonely existence without Maxie? If she refuses to forgive him, Peter’s despair could turn to anger. He may decide he’s got nothing left to lose and that could pose a serious threat.

Anna (Finola Hughes) is obviously a target, but Sam (Kelly Monaco) could easily be one as well. After all, she found the lighter and helped Jason discover the truth. In a way, Sam will be the reason for Peter’s downfall. If Peter learns how his exposure happened, he may blame Sam for everything.

Perhaps Peter will soon be on a mission for revenge! There’s been buzz about Peter potentially being killed off, so this is the kind of thing that could build to that. General Hospital spoilers say Sam will battle total terror down the road. Could Peter be the reason why?

This would also create another opportunity for Jason to save the day. Many GH fans love Jason in rescue mode, so this could bring some fun scenes. Whatever the case, Peter’s storyline has a few more surprises in store. We’ll give you updates as other news comes in. Stick with the ABC soap and don’t forget to check CDL often for the latest General Hospital spoilers, updates and news.