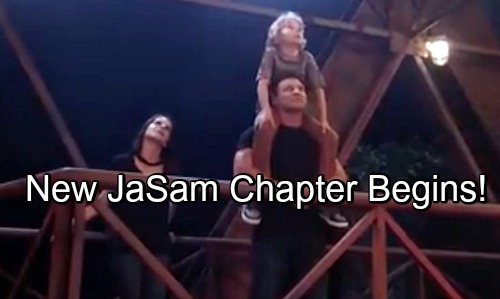 General Hospital (GH) spoilers tease that Sam McCall (Kelly Monaco) will close a chapter of her life soon. That means she’ll officially end her marriage to Drew Cain (Billy Miller) and put that romance behind her. Of course, that also means Sam will be free to begin the next chapter.

“JaSam” fans are hoping Sam will move on with Jason Morgan (Steve Burton). She’s been dragging her feet, but that’s understandable. Sam needed time to grieve the loss of “Dream” and get this divorce out of the way. Once all that’s wrapped up, perhaps Sam can focus on a bright future with Jason.

It’s clear that Jason and Sam have a rich history to draw from. In fact, General Hospital is now featuring a “Best of JaSam” episode collection on the ABC GH website. You can check out plenty of their sweetest moments over the years. Maybe the show wants to get everyone hyped up for the seemingly inevitable reunion.

Kelly Monaco has been open about her preference for working with Billy Miller. There’s ongoing buzz about their real-life relationship, so that’s probably a factor. Still, you have to give the people what they want. Drew and Sam have plenty of supporters, but there’s been so much buildup to another round of “JaSam.” Many viewers would feel cheated if GH bailed on this couple now.

General Hospital spoilers say Sam, Jason, and Danny Morgan (T.K. Weaver) will enjoy some fireworks on the footbridge. Will their Independence Day celebration lead to family bonding? You bet it will! This could be just what Sam and Jason need to kick off that new chapter we mentioned.

Jason and Sam have already been spending more time together for work. They pulled off quite a feat at that Swiss bank and now Sam’s helping out with Nelle Benson’s (Chloe Lanier) takedown. She knows how much Jason wants to save Carly Corinthos (Laura Wright), so she’s stepping up to assist him.

Once Sam and Jason start spending their free time together as well, it shouldn’t be long until their passion reignites. Sam just has to let go of her doubts and let herself to be happy. Are you anxious to see Jason and Sam reunite? We’ll give you updates as other GH news comes in. Stay tuned to the ABC soap and don’t forget to check CDL often for the latest General Hospital spoilers, updates and news.