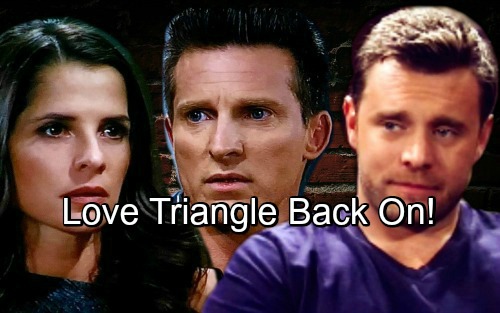 General Hospital (GH) spoilers tease that Sam’s (Kelly Monaco) life will continue to be complicated. She’s seemingly let go of Drew (Billy Miller), but things can change in an instant in Port Charles. As Drew deals with Oscar’s (Garren Stitt) medical crisis, he’ll find himself in need of support. Sam still loves Drew and doesn’t want to see him suffer. She’ll gladly be there for Drew during his upcoming difficulties.

However, Sam can’t deny the familiar spark she feels with Jason (Steve Burton). It feels like the show’s been building to a “JaSam” reunion for a while now. Unfortunately, things have stalled a bit thanks to other storylines. Jason’s been busy helping Carly (Laura Wright) and Sonny (Maurice Benard) with all their problems. He hasn’t had much time to grow closer to Sam.

That could change as we head into the fall. General Hospital spoilers state that Sam will take some baby steps toward Jason, so they could be on the verge of a renewed romance. Nevertheless, those complications we mentioned will come into play. Some surprising events will unfold in the coming weeks. Jason, Drew and Sam will be connected through mayhem they never saw coming.

Of course, we can’t forget about Drew’s other options. He’s currently involved in a story with Margaux (Elizabeth Hendrickson), so that could lead to real love. Drew and Kim (Tamara Braun) will also connect over their Oscar worries. That might create an opportunity for parental bonding to become something more.

Still, Drew will probably never truly get over Sam. His feelings for her will always be just under the surface. If Sam and Jason aren’t able to recapture their magic, it’s possible Drew and Sam will reunite. There are still loads of “Dream” fans out there, so you never know what GH might have in store down the road.

Frank Valentini, General Hospital’s executive producer, made some crucial promises in an interview with Michael Fairman. When he was asked if this love triangle had been dropped, Valentini quickly denied it. “No, we are definitely playing it,” Valentini insisted.

Valentini also offered an explanation of how it would all unfold. He didn’t want viewers to think they would just ignore all the complexities. “There are many iterations: Drew and Sam are connected through their children, and their love, and the history that they have. And as well, Jason and Drew being brothers, and that Jason and Sam have their own history, as well. There’s way more to come!”