General Hospital Spoilers: Sam’s Choice Comes Too Late, Drew Moves on with Kim – Single Sam Must Fight for Her Man 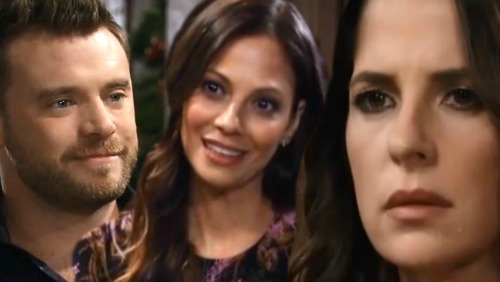 General Hospital (GH) spoilers reveal that Sam (Kelly Monaco) may have set herself up for major heartbreak. During a chat with Jason (Steve Burton), Sam suggested that she knew what she was getting herself into. She told Drew (Billy Miller) about her feelings for Jason, but that came with a huge risk.

Sam’s not ready to commit to Jason either, so she understands that she could lose them both. That’s most likely Sam’s greatest fear since she loves these men so much. Nevertheless, Sam just had to take the leap. She felt like she was living a lie by staying silent with Drew. He deserved to know the truth and she deserved the chance to figure this out.

General Hospital spoilers say Sam will leave town to clear her head. She’ll take a breather and try to decide who her heart truly belongs to. Unfortunately, Sam may get it wrong. GH seems to be gearing up for a “JaSam” reunion, especially since we know they’ll end up a hotel together. However, that doesn’t mean Sam’s making the right choice.

Jason and Sam have some sizzling chemistry. There’s no doubt about that! They’ve also got years of history on their side. Many General Hospital fans swoon over those baby-faced flashbacks and that oh-so-familiar song. Still, the past can be awfully difficult to recapture. Sometimes nostalgia can get your hopes up for something that’s just not meant to be in the present.

Kelly Monaco and Billy Miller have made it clear that they enjoy working together. They do “Killy” events constantly and tend to cozy up to each other for pictures. There’s always buzz about Miller and Monaco dating in real life, so it makes sense that they’re rooting for “Dream.” They obviously want to keep shooting all those scenes together.

GH may give Miller and Monaco what they want at the end of this lengthy journey. Perhaps this story is more about Sam learning to love Drew for who he really is and not just another version of Jason. After “JaSam” gives it another shot, Sam might determine that Drew’s the only man for her. She may close the door on her relationship with Jason and assure Drew that he’s got her whole heart.

That’s when Sam’s worst fear could come true. Drew may have moved on by then! He’s already been having some nice bonding scenes with Kim (Tamara Braun) lately. If Drew gets his memories back and remembers their intense passion, that’ll be another hurdle for Sam to overcome.

It’d actually be great to see Sam do the pursuing for a change. Will she have to step up and fight for Drew? Will her hard work pay off? We’ll give you updates as other GH news comes in. Stay tuned to the ABC soap and don’t forget to check CDL often for the latest General Hospital spoilers, updates and news.