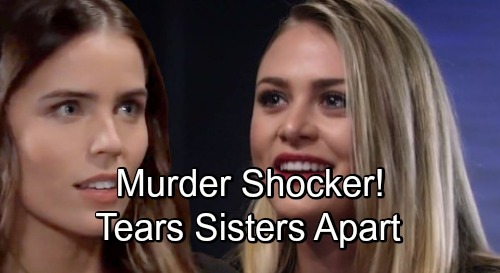 General Hospital (GH) spoilers tease that things are looking up for Nina (Michelle Stafford). Sasha (Sofia Mattsson) was ready to bail and leave Port Charles behind, but a chat with Valentin (James Patrick Stuart) convinced her to stay. In the end, Sasha was glad she did! She had a chance to see photos of her relatives and gain a deeper understanding of Nina’s perspective.

Now Sasha intends to hang around even longer, so that’s great news for Nina. She’ll want to build some trust between them and continue to win Sasha over. General Hospital spoilers say they’ll make more progress, but trouble’s brewing. A series of shockers should put Nina and Sasha’s relationship to the test.

For starters, GH spoilers hint that Nina will face more rejection next week, October 22-26. It’s tough to believe Sasha would turn on Nina again that fast, so this may involve another crisis. On the other hand, it’s possible Sasha and Nina will deal with another bump in the road.

Nina’s a pro at putting her foot in her mouth, so another round of damage control may be necessary. Sasha’s easily offended thanks to this tricky situation. Even if all goes well, there are plenty of problems that could arise later.

The fact that Nina and Sasha are connecting could set up a crushing bombshell. If mistakes were made and Sasha isn’t really Nina’s daughter, that could be a blow for both of them. However, there’s a chance GH will stick to the DNA results and see this through. In that case, Nina may have a chance to bond with Sasha over a tragedy in the family.

Sasha was intrigued by a picture of her half-sister, Kiki (Hayley Erin). Nina may bring them together and let them get to know each other. They seem like they could become fast friends. It may be pretty easy to form a sibling bond right off the bat.

Unfortunately, General Hospital spoilers hint that Kiki may become a murder victim. Sasha may be horrified to learn her new sis has met a gruesome end. On the bright side, Nina could comfort Sasha. If this ordeal brings them closer, GH could let Nina and Sasha make lemonade out of lemons.

General Hospital fans won’t want to miss the rest of this hot storyline. We’ll give you updates as other GH details emerge. Stay tuned to the ABC soap and don’t forget to check CDL often for the latest General Hospital spoilers, updates and news.