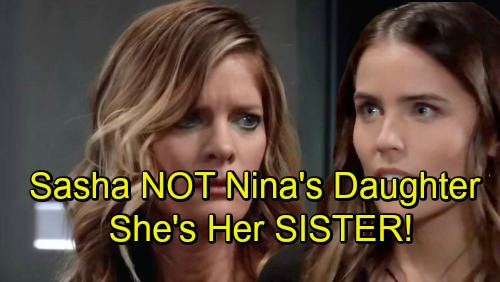 General Hospital (GH) spoilers tease that Nina (Michelle Stafford) will face some tricky situations. She’ll be on edge about her meeting with Sasha (Sofia Mattsson), but the hope of bonding with her will make it worthwhile. Nina will try to believe that after all the awkwardness passes, she can find common ground with Sasha and be in her life. That’s really all Nina cares about.

Nina would never try to replace Sasha’s adoptive mom, but she’d love it if Sasha had room in her heart for another one. She’d happily connect and care about Sasha forever. Nina may not have been in Sasha’s life from birth, but she’d be more than willing to catch up on what she missed. The past is gone, so Nina will focus on the present and future.

However, Sasha’s rejection will reduce Nina to tears. She’ll be a devastated mess when Valentin (James Stuart Stuart) finds her after the meeting. Valentin will hate that this mother-daughter reunion didn’t go as planned, but there may be another side to this story. Perhaps the facts aren’t exactly the facts!

GH fans know Curtis (Donnell Turner) had two DNA tests done at separate locations. General Hospital’s driving home the point that they weren’t tampered with. With that in mind, maybe there’s another path to confusion. What if Sasha is indeed a relative, but not the one Valentin and Curtis assume? Could Sasha turn out to be Nina’s biological sister instead?

That’d be an interesting twist in this hot plot. It would explain how most of the genetic markers matched up for Nina and Sasha. It’d also leave the door open for Nina’s true daughter to be revealed. If it’s Kiki (Hayley Erin), Nina may not have much time to form a connection. General Hospital spoilers hint that Kiki may be killed off in the coming months.

Nelle (Chloe Lanier) would be an intriguing option, but she’s stuck behind bars. Since Nelle’s not returning permanently anytime soon, she wouldn’t be able to bond much with Nina either. Not that it’d be easy anyway! Nina and Nelle’s relationship started out strong, but ultimately took a nosedive. That mother-daughter revelation would bring some crazy drama.

In other words, Kiki and Nina would be great fits story-wise. They just won’t be hanging around to give Nina the connection she craves. That’s where little sis Sasha might come in. Nina would still have a family member to bond with. It’d give the newbie a solid link on canvas, which is ideal when new characters are introduced.

Valentin and Curtis believe they’ve found Nina’s daughter, so they’ve stopped the search. If Sasha turns out to be Nina’s sibling instead of her child, they may have to start it back up. Would you like to see this General Hospital bombshell? We’ll give you updates as other GH news comes in. Stick with the ABC soap and don’t forget to check CDL often for the latest General Hospital spoilers, updates and news.