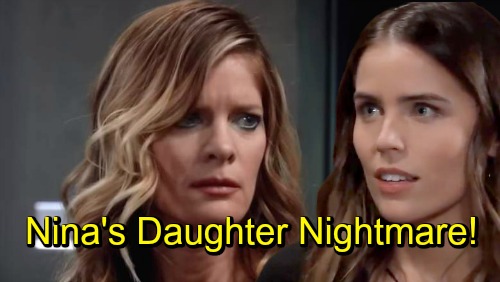 General Hospital (GH) spoilers tease that Nina’s (Michelle Stafford) dream could turn into a nightmare! For many years, Nina’s only real wish was to be a mother. She always wanted a child of her own, but she eventually gave up that goal.

Nina became a stepmom to Charlotte (Scarlett Fernandez), which eased her pain just a bit. Nevertheless, Nina’s had a hole in her heart for as long as she can remember. Now that we know Nina’s daughter is still alive, it’s easy to see why.

Nina probably felt that lingering connection on some level. Something inside her undoubtedly felt that pull to her long-lost kid. General Hospital spoilers say Nina will be taken aback by Valentin’s (James Patrick Stuart) upcoming news. Once he’s got the necessary confirmation, Valentin will finally reveal that he found Nina’s daughter. He’ll be glad that he can grant Nina this wish after all the conflict.

After Nina gets over the shock, she’ll become skeptical. Nina will definitely want proof before she gets her hopes up. GH spoilers state that Valentin will happily offer that evidence. In addition to the two sets of DNA test results, Valentin will mention that Curtis (Donnell Turner) took the lead on this investigation.

That’ll be enough to convince Nina that she’s truly a mom. She’ll be overjoyed to learn her daughter’s been found – supposedly anyway. There may be a twist that comes later, but General Hospital can get some drama out of this revelation for now.

There’s a good chance Nina will have a hard time bonding with Sasha (Sofia Mattsson). GH viewers will recall that Sasha gave Curtis an attitude. She refused to believe she was adopted, so she may be reluctant to even meet with Nina. Despite the proof, Sasha may suggest that she had a mom and doesn’t need another one.

That would certainly bring devastation on Nina’s side of things. What’s worse? Not having a daughter or having one that wants nothing to do with you? Valentin could unintentionally cause pain for the woman he loves.

On the bright side, this could help Valentin and Nina reconnect. General Hospital spoilers say Nina will indeed grow closer to Valentin in the coming weeks. She may lean on him as she struggles to pull Sasha closer. Sasha may agree to see Nina sooner or later, but that doesn’t mean the road ahead will be obstacle-free. GH fans will likely see some strong emotions along with some hostility.

Will Nina be able to settle Sasha down? Will it even matter since someone else could be her daughter after all? We’ll give you updates as other GH details emerge. Stay tuned to the ABC soap and don’t forget to check CDL often for the latest General Hospital spoilers, updates and news.