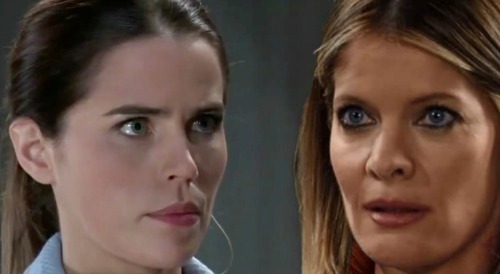 General Hospital (GH) spoilers tease that Sasha (Sofia Mattsson) is poised for a major slipup. GH fans know that Sasha isn’t who she claims to be. Under Valentin’s (James Patrick Stuart) orders, Sasha’s been pretending to be Nina’s (Michelle Stafford) biological daughter. He was hoping she’d meet with Nina, bond with her briefly and hit the road.

Of course, Sasha was keen on sticking around and taking advantage of all Port Charles had to offer. She may end up regretting that decision if she isn’t already! After all, Sasha already got kicked out of Kiki’s (Hayley Erin) apartment. She later ended up drugged in a compromising position thanks to Ava (Maura West).

Sasha is probably starting to realize just how crazy life can get in PC, but she should hang in there and make this work. She’s got a new job at Crimson, which is working out well so far. There’ll probably be opportunities to score gifts, extra cash and more. Sasha might as well milk this whole fake daughter thing for all it’s worth. That includes making additional demands in her scheme with Valentin.

General Hospital spoilers say Valentin will face a stern warning next week. Sasha may want something in exchange for her silence. She could spill the beans at and moment, so Valentin knows the risks here. He may have no choice but to give Sasha what she wants.

Unfortunately, Sasha’s greed and overconfidence may be her downfall. She seems positive that she can dupe Nina indefinitely, but that obviously won’t be the case. It’s just a matter of time until Sasha makes a mistake. It might be something small, but it could be enough to put Nina on a path to the truth.

Nina might suspect that something’s not quite right with Sasha. If she uncovers something that doesn’t add up, she may wonder if Valentin’s cooked up a plot. Nina might even secretly order a new DNA test to confirm her suspicions. If she gets Curtis (Donnell Turner) in on this behind Valentin’s back, they could both be in for a shock.

The heart pendant could be another hint along the way. If Nina finds the other half in someone else’s possession, she’ll know that there could be more to the story. General Hospital spoilers hint that Nina may have to do some detective work, but it’ll be worth it in the end. She needs to find her true daughter, so let’s hope Nina figures all this out ASAP.

It sounds like some fantastic Sasha drama’s ahead. We’ll give you updates as other GH news comes in. Stay tuned to the ABC soap and don’t forget to check CDL often for the latest General Hospital spoilers, updates and news.