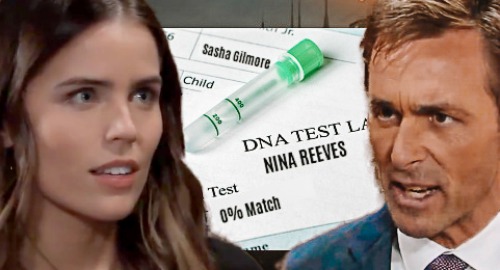 General Hospital (GH) spoilers tease that little miss perfect Sasha (Sofia Mattsson) may not be all she’s cracked up to be. We’re almost seeing shades of Nelle (Chloe Lanier) here. Remember how Nelle showed up after the kidney donor search and immediately wanted to leave? It turned out to be an act since Nelle was really targeting Carly (Laura Wright).

Michael (Chad Duell) ended up convincing Nelle to stick around and eager Carly offered her a job. Carly pretty much became besties with Nelle and look how well that turned out for her! Now consider Sasha’s situation. She supposedly only agreed to the DNA tests to disprove Curtis’ (Donnell Turner) theory.

When the results showed Sasha was Nina’s (Michelle Stafford) daughter, Sasha claimed she just wanted closure. Of course, things quickly shifted. Now Sasha’s all about bonding with Nina and getting to know the fam. What prompted this sudden turnaround? Is Nina actually winning Sasha over or is this a dangerous game?

Sasha’s still a bit of a mystery to General Hospital fans, which means she could easily be a con artist. The few facts she’s revealed have been highly suspicious. For starters, Sasha seems like a party girl. She was anxious to hit the clubs with Kiki and have some fun. That could indicate that Sasha’s not too keen on working.

Speaking of work, Sasha’s occupation is suspicious. She explained that she’s involved in a temp agency and happens to be good with computers. Why did GH choose this career path? Perhaps they’re giving Sasha the skills necessary for something shady. For all we know, Sasha could be a hacking expert. Who’s to say she didn’t do some research, hack the systems and change the DNA results at both sites?

Sasha also slipped money into the conversation. She suggested that she had to get home because if she didn’t work, she didn’t get paid. Nina was quick to offer Sasha a job at Crimson or possibly The Invader if Peter (Wes Ramsey) got on board. Sasha argued that her adoptive mother taught her to make her own way, but maybe that’s what this potential scam’s about!

Thanks to Kiki’s (Hayley Erin) generous offer, Sasha now has a place to stay, too. She’s starting to seem like a freeloader. Just because someone’s reluctant to accept help doesn’t mean they don’t want it. Again, never forget Nelle’s many schemes. She worked the whole “woe is me, I’m so poor” angle to death, but she was clearly looking for a big payout in the end.