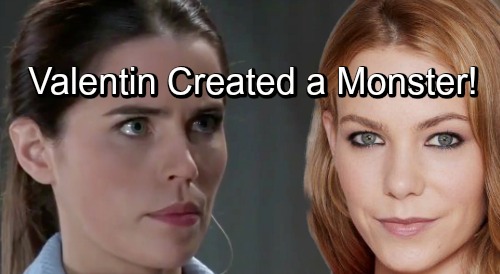 General Hospital (GH) spoilers tease that Sasha’s (Sofia Mattsson) true colors will soon be revealed. As of right now, Valentin’s (James Patrick Stuart) the only one who knows Sasha is shady. She isn’t really Nina’s (Michelle Stafford) biological daughter, so Valentin’s got a lot at stake. One wrong move could mean shattering Nina’s heart and ruining his reunion chances for good.

It was a terrible idea to dupe Nina like this, but Valentin may have felt it was his only option. Nina would barely look at him, so he had to do something drastic. If he hadn’t acted fast, Nina might’ve closed the door on their romance forever. Valentin just needed a crack to slide in. This plan gave him a sliver of hope and finally gave Nina the child she’s been dreaming of.

Valentin surely thought it was a win-win, but it sounds like it’ll be a lose-lose! Nina’s destined to lose this “daughter” she’s bonding with. Valentin will inevitably lose all the progress he’s made, too. However, GH spoilers say the worst part may be Sasha’s dark side. It’s going to be unleashed and when that happens, Port Charles had better watch out.

Nina has formed a connection with Sasha, so she might’ve been willing to keep that bond – even without that mother-daughter tie. Would it have been quite the same? No, but it’d be something at least. After all, Valentin’s the one who roped Sasha into this. Nina may not blame Sasha too much for going along with it. It’s what Sasha chooses to do on her own that could be the real problem.

General Hospital spoilers say Sasha will start a feud with Kiki (Hayley Erin), so that’ll be one family issue. As she pursues Griffin (Matt Cohen), it’ll naturally cause plenty of conflict. Sasha may even team up with Ava (Maura West) and add to the drama. They’re both sneaky, so they might be two peas in a pod.

Of course, Sasha will probably make harsh demands as well. Valentin no doubt paid her handsomely, but Sasha will surely want more. That’ll be especially true when things get messy. Valentin will rev up his efforts to get rid of Sasha, but she won’t go quietly. She may threaten to expose everything unless Valentin hands over enough to set her up for life.

By the end of this nightmare, Sasha could be giving off serious Nelle (Chloe Lanier) vibes. She may not be as crazy, but she’s every bit as manipulative. General Hospital spoilers say some Sasha shockers are still to come, so stay tuned. We’ll give you updates as other GH news comes in. Stick with the ABC soap and don’t forget to check CDL often for the latest General Hospital spoilers, updates and news.