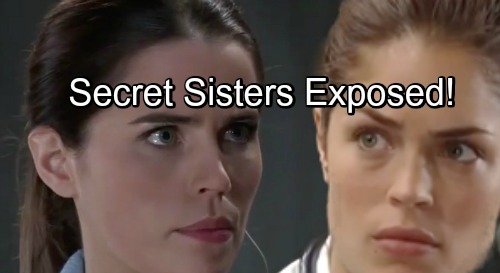 General Hospital (GH) spoilers reveal that Valentin Cassadine (James Patrick Stuart) and Sasha Gilmore (Sofia Mattsson) have cooked up a plot. Sasha is admittedly NOT Nina Reeves’ (Michelle Stafford) daughter, but her DNA was still a 99 percent match. How exactly did they pull this off?

Curtis Ashford (Donnell Turner) used two different labs, but he never revealed the name or location of the second one. It’s possible that was done off screen, but that’d be a pretty big detail to leave out. It seems Valentin was genuinely in the dark and that’s probably because it didn’t matter. He was most likely confident the DNA would be a match no matter what.

With that in mind, it appears Sasha is indeed a blood relative. There are a few options here, but let’s focus on some that are especially timely. Britt Westbourne (Kelly Thiebaud) just made a deal with Anna Devane, so she’s a free woman. Is it a coincidence that Britt’s back on GH right as this Sasha scheme’s coming to light? We doubt it!

As soon as Sasha debuted, General Hospital fans pointed out her resemblance to Britt. They have the same hair color, build and facial structure. Could Sasha be the illegitimate child of a teenage Britt? That’s one possibility to consider, but there are others to take into consideration as well.

There’s also a chance Sasha is the previously unmentioned younger sister of Liesl Obrecht (Kathleen Gati) and Madeline Reeves (Donna Mills). Then again, Liesl may have gotten pregnant by Cesar Faison (Anders Hove) again and handed her baby over to an adoption broker. It might’ve been the same one Madeline used. If that last theory’s true, Britt might remember her mom’s pregnancy.

Regardless, Britt and Sasha could easily run into each other around town. They just might comment on their similar features and keep this story moving along. Sasha certainly showed some Britt-like personality when she stood up to Valentin. It seems like scheming’s in her blood and we know why if she’s so closely connected to Britt.