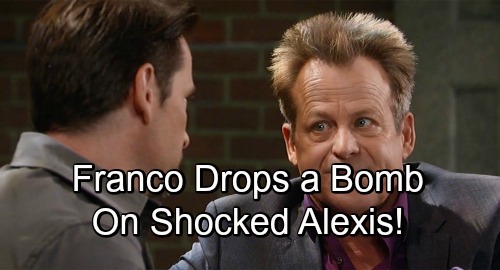 General Hospital (GH) spoilers tease that Scott (Kin Shriner) will make a big decision. He knows about Kiki (Hayley Erin) and Griffin’s (Matt Cohen) hookup, so he’ll feel obligated to warn Alexis (Nancy Lee Grahn). This is certainly something she needs to know before the trial kicks off.

Of course, Scott can’t provide the warning himself. He’s working as Dr. Bensch’s (James DePaiva) attorney with the goal of tanking the case for Ava (Maura West). It would be a massive mistake to start spilling major details to Kiki’s lawyer.

Fortunately, Scott has the perfect middleman. Franco’s just as invested as Ava here. He wants to protect Kiki and bring Dr. Bensch down, so he’ll remain in the middle of all this. That means Franco will soon face a messy dilemma.

General Hospital spoilers say Scott will pass on his burden to Franco. He’ll reveal that Kiki slept with Griffin and push Franco to fill Alexis in. Scott will try to keep this revelation out of the courtroom if possible, but he can’t make any promises. He’s defended enough clients to know that things can go wrong.

Franco will realize this is dangerous information. He won’t want to blab about Kiki’s private matters, but what choice does he have? This could turn into a very public scandal if he keeps the secret to himself. There’s a good chance Franco will deliver this ticking time bomb to Alexis.

Once Alexis knows the truth, she’ll undoubtedly confront Kiki. Alexis won’t understand why Kiki would want to deceive her. She doesn’t need curveballs as Kiki’s attorney. They’re on the same side, so Kiki should’ve disclosed everything.

Nevertheless, GH spoilers say the trial is rapidly approaching. Alexis may not want to bail on Kiki this late in the game, especially since this doesn’t change what Dr. Bensch did. Kiki and Griffin’s one-night stand was a consensual encounter. Dr. Bensch is still a creep who made unwanted advances and punished Kiki for rejecting him.

The main facts will stay the same, but Alexis will have to worry about a shocker she didn’t anticipate. General Hospital spoilers suggest that despite all the preparation, Alexis may lose control in the courtroom. We’ll give you updates as other GH news comes in. Stick with the ABC soap and don’t forget to check CDL often for the latest General Hospital spoilers, updates and news.