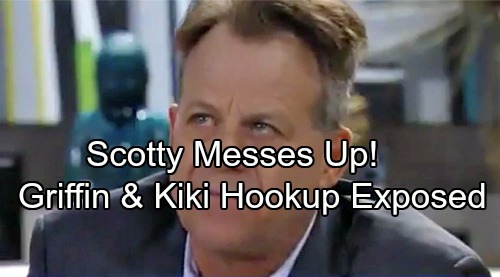 General Hospital (GH) spoilers tease that Scott (Kin Shriner) will be confident in his abilities. Dr. Bensch (James DePaiva) approached him about representation and suggested a countersuit. The creepy doc claims he’s suffered “grievous damage” thanks to Kiki’s (Haley Erin) accusations and Lulu’s (Emme Rylan) article. It’s been pretty easy for people to point the finger in Dr. Bensch’s direction.

In addition to taking on the newspaper and GH, it seems Scott will have to battle it out with Alexis (Nancy Lee Grahn). Previous General Hospital spoilers hinted that Alexis would take herself off the case, but she’s still all in at this point. Alexis is anxious to take this jerk down and she’ll actually get some help from Dr. Bensch’s lawyer!

Ava’s (Maura West) going to double Scott’s rate and in return, he intends to tank the case. Scott probably thinks this will be easy money. Winning a court battle usually requires solid skills and plenty of preparation. To defend Dr. Bensch, Scott just has to show up and act like he doesn’t know what he’s doing.

This should be a piece of cake, right? Wrong! General Hospital spoilers say there’ll be a big problem. It’s never a good idea to keep secrets from your attorney and Kiki may find that out the hard way. Alexis insisted that if there was anything Kiki hadn’t divulged, she needed to come clean. She doesn’t want any surprises in court.

Unfortunately, Kiki decided to keep her mouth shut about hooking up with Griffin (Matt Cohen). That’s bound to come back to bite her. Scott won’t want this info to get spilled during the proceedings, but it may be unavoidable.

If Scott asks the wrong question or slips up somehow, Dr. Bensch may be able to testify about the connection he’s witnessed. Of course, Dr. Bensch could even force Scott to work this angle or risk being fired. Scott won’t want to miss out on his payday or hand the case over to some shark who will destroy Kiki. At that point, his best bet will be to use the info and handle it poorly.

Will the truth about Kiki’s one-night stand come out in court? Can Scott salvage the sabotage scheme or will the damage be too severe? Will Dr. Bensch get what he has coming one way or another? We’ll give you updates as other GH details emerge. Stick with the ABC soap and don’t forget to check CDL often for the latest General Hospital spoilers, updates and news.